With no shortage of cloud providers, we take a look at two of the most popular options for businesses 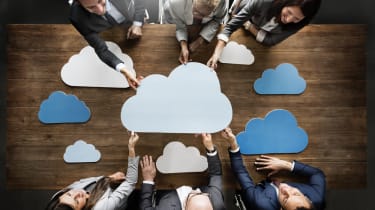 With digital transformation spreading throughout every industry and sector, cloud computing has become one of the great innovations of IT in recent decades.

At the intersection of this movement are some of the biggest names in tech, such as Amazon Web Services (AWS), Google, Microsoft and IBM. Despite being relatively new (AWS only started offering its first services in 2006), the market is fiercely competitive and business have a wealth of options to choose from.

On top of that, the flexibility of cloud computing means customers aren't limited to just one provider. This is where hybrid cloud and multi-cloud environments have come to prominence.

The distinction between the two is largely down to private and public cloud services, private being in-house, on-premise infrastructure or managed services, while public cloud is a commodity product provided by the likes of AWS or Google Cloud. But what does this look like in practice?

Hybrid cloud mixes both public and private clouds. For example, services such as running payroll software can use the public cloud, while things like inactive or "cold" data can live in the private cloud. Often the reason for using this format of cloud is to do with a need to balance flexibility with security, cost effectiveness and latency.

While it may be cheaper to spin up some cloud instances for a time-limited development project and turn them off when no longer needed than provision extra capacity in an on-premise data centre. On the other hand, long-term storage is often cheaper in a private cloud than in the public cloud, and local laws may restrict what information can be stored in a third-party service as well.

Hybrid cloud used to be quite a niche model, with some industry watchers claiming it was just a step on the way to full public cloud. Increasingly, however, it's becoming mainstream: A recent survey from RightScale estimated that enterprises with a hybrid cloud strategy have grown 58% this year, jumping up from 51% in 2018.

The hybrid cloud gives companies the reassurance that sensitive information, such as intellectual property or customer data, can still be stored and maintained within their own data centres. For organisations with lots of "cold" data -- information that's accessed infrequently -- it may also be cheaper to use a hybrid approach than full public cloud.Cons

Hybrid approaches can be more technically difficult to manage, requiring IT departments to dedicate plenty of time and effort to configuration, planning, deployment and maintenance of two different platforms. On top of that, there's the arduous task of adapting in-house systems to work effectively with third-party ones.Security is also an issue with hybrid infrastructure, causing more major incidents than cloud-hosted applications or on-premise workloads. According to a 451 Research report, 51.8% of companies see hybrid cloud storage as less secure.

Multi-cloud differs from hybrid cloud in that it uses multiple public cloud environments rather than a mixture of public and private. For example, an application in a multi-cloud environment may run all compute and networking activities in AWS while using database services from Microsoft's Azure.

It's a complex way of operating, but one that's rapidly on the rise within the business world. According to an IBM survey, 85% of organisations are now using a multi-cloud business model, with 76% of those opting for multiple hybrid clouds - just to confuse things further. It doesn't stop there: IBM also predicts that the number of companies using a multi-cloud strategy will increase to 98% by 2021.

Without being tied to one provider, companies can operate and innovate at speed. If tied to one host, you may find that, although it's great for some things, it might not have the best of everything, which could limit your ambitions.

This also reduces the risk of vendor lock-in, as companies won't necessarily become dependent on one provider's technology.

The obvious problem with a multi-cloud environment is the 'multi' part. The more you use the more complicated it gets. This could lead to mismanagement and result in increased costs and disrupt your business, not to mention, the more clouds you use, the more you'll need to secure.