Raspberry Pi and Lego cloud cooked up by Glasgow University 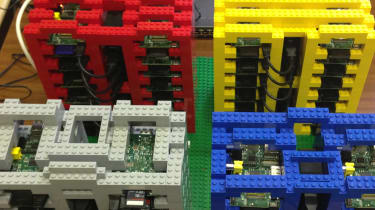 The University of Glasgow has created a working model of a multi-million pound cloud computing platform using Lego bricks and Raspberry Pi mini-computers.

We've been able to build a system which allows researchers and students access to a working cloud computing infrastructure.

According to a statement from the University, the doctors realised the increasing importance of cloud knowledge for their students' future as IT professionals.

However, as cloud computing service providers maintain a high level of secrecy over how their infrastructure works, it was difficult for researchers or students to develop a good practical knowledge of the area.

"For an initial investment of less than 4,000, we've been able to build a Linux-based system which allows researchers and students complete access to a working cloud computing infrastructure at a tiny fraction of the cost of its commercial equivalent," said Singer

"We've used 56 Raspberry Pis in this first project but the numbers involved could easily be scaled up or down as required," he added.

The 56 Raspberry Pis sit in racks made from Lego, which the university claims mimic the modular design, as well as the function, of a cloud computing infrastructure.

White said: "Our Raspberry Pi system gives us ... a very clear correspondence between the hardware and the software, and a physical setup which is very similar to how racks of servers work in real data centres. We've been really inspired by having a practical model to experiment with.

"The ARM processors which are used in the Raspberry Pi are also becoming more common in cloud data centres because they require less energy to run than more traditional PC hardware, which gives our students another advantage for their future careers."

While the Raspeery Pi Cloud is currently available for students to work on, the lecturers behind the project said they are hoping to make cloud computing a key part of the university's teaching programme in the future.