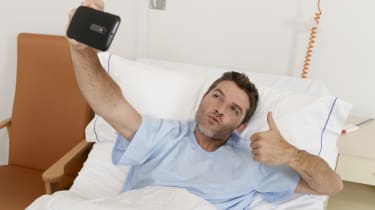 The NHS is planning to roll out a digital citizen ID scheme for patients across the UK - with 'video selfies' touted as a potential verification tool.

Lewis said the plans would see patients register through their smartphones by providing their unique NHS number, showing a form of photo ID on camera and recording a short video, according to the Health Service Journal (HSJ), which broke the news, and later confirmed by NHS Digital.

He added there would also be physical locations where patients without the means or capability to video themselves could register, as he demonstrated a prototype of the system at the event.

NHS Digital will commence testing on private beta within the next few months, with a public beta starting towards the end of the year or early next year. The system itself - which is yet to be built - will cost 85 million through to March 2019, according to papers released to HSJ under the Freedom of Information (FOI) Act.

The plan, which is in its very early stages, will not involve capturing or storing biometric data for one-time verification, but may use biometrics, such as fingerprint scanning or facial recognition, as part of multi-factor authentication for users to access an app in future.

NHS Digital declined to comment directly on the project, although it labelled Citizen ID "a key element to future digital health services" in a tweet sent during the TechUK event.

NHS England and the Department of Health both declined to comment, instead referring IT Pro to NHS Digital.

Although Lewis, during his presentation, claimed the system will aim to reach 25 million people within five years, NHS Digital played down this figure as speculative. In Whitehall's own Government Transformation Strategy, it sets out a similar goal to get 25 million people using Verify, another form of confirming people's identities online, that is an initiative of the Government Digital Service.

"We're engaging developers inside and outside of the health and care system; letting them know that the digital NHS is open for business to encourage innovation that will raise the bar on the standard of digital health and care tools and services for patients," she said at the time.

"And we're also working closely with CIOs and CCIOs locally to support them in commissioning, developing and implementing the very best digital services for their unique populations."

The health service has already taken steps to realises its ambitions in recent months, for instance, calling in February for developers to submit their digital health applications for inclusion in its Apps Library, which offers a catalogue of verified and trusted tools to help patients manage their healthcare.

According to the NHS's roadmap for digital health and care services, Citizen ID will be ready by 2019/20, in conjunction with an app that is set to be released by the end of the year.

The NHS is trying to digitise many aspects of how it delivers services, but has experienced problems in doing so. All 200 NHS trusts failed cyber security assessments earlier this year, conducted after last year's WannaCry ransomware attack that forced more than 40 hospitals to postpone operations.

Meanwhile, the body has been criticised for data-sharing deals with the Home Office and private companies like DeepMind.