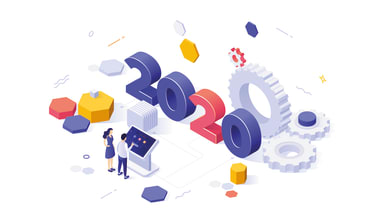 As we head into the third decade of the 2000s, there's a lot of uncertainty around the world that will undoubtedly affect the IT industry. But there's also been exciting progress over the past few years in areas such as AI, connectivity and increased focus on sustainability that gives us hope.

Here at IT Pro, we're neither brave nor foolish enough to predict where we will stand at the end of the decade, but here are some trends and developments we expect to see over the course of the next 12 months.

To paraphrase a rather trite sporting idiom, 2020 is going to be a year of two halves. On the one hand, a vicious presidential election fight, the looming spectre of Brexit and the general deepening of political tensions around the globe will lead to greater instances of state-sponsored cyber attacks – or at least, more accusations of state involvement in various hacks.

At the same time, the threats most businesses will actually be facing will largely stay the same as they always have been; phishing attacks, compromised email accounts and poorly-configured security settings will pose more of a risk to most organisations than armies of Russian or North Korean hackers. Despite a level of general hype around the issue of nation-state hackers, they’re not a realistic threat to the majority of businesses.

Unfortunately, the continuing presence of FUD within the security industry means that many businesses will still be focusing their security strategies around these somewhat unrealistic threats, rather than the more mundane but more likely threats that have been around for decades.

What is the world going to do about Huawei? For me, it’s a big question and one that really needs a solution. Does the company have deep ties with the Chinese government? Does its telecoms equipment really have secret back door access? Or are these concerns nothing more than trumped-up accusations?

Huawei spent most of 2019 on a PR offensive, having been placed on the US Department of Defense’s ‘Entity’ blacklist. As the year progressed we saw more and more tech firms and partners voice concerns about what evidence the US had to ban all trading with the Chinese firm.

These were big voices, too, such as Microsoft and Google. I suspect this will carry on in 2020, as will the rather bitter trade war between China and the US – particularly if Donald Trump wins a second term in the upcoming presidential elections.

I usually take this opportunity to hedge my bets on what I believe will be the defining moments of 2020, yet, in many ways, there’s little need for me to do so. For those who concern themselves with business operations, data processing or compliance, 2020 is pockmarked with a series of historic regulatory changes, and in that sense, we know what’s coming.

To kick the year off, we’ll see the introduction of the California Consumer Privacy Act, which many consider to be the US’ most progressive data protection law to date and is heavily inspired by, if not a heavily watered-down version of, the EU’s GDPR. While it’s enactment will initially only be felt by those who have customers residing in California, the regulation is likely to be the first of many, and will only place greater pressure on federal lawmakers to create something akin to a national data protection act. If that happens, it would have profound implications for transatlantic data sharing.

Over in Europe, we’ll have our own impending legislation to deal with – most notably, the ePrivacy Regulation, which can be best thought of as GDPR part 2, only this one focuses on electronic communications. This was expected to arrive at the same time as GDPR in May 2018, but ongoing deliberations on its content pushed it back initially to 2019, then again into 2020 where it’s likely to be settled once and for all.

Once we add in an impending review of standard contractual clauses, a likely overhaul or complete dismantling of Privacy Shield, and all the added legal problems that could arise from Brexit, there’s plenty for businesses to get to grips with already.

2020 is going to be the year of full-fibre and 5G – or at least promises and plans for them. Having won a huge majority, Boris Johnson’s Conservative government is now in a strong position to deliver on its promise for full-fibre across the UK by 2025.

The Tories have said nothing on the subject of 5G, but with it rolling out across the country as we speak, I have no doubt that there will be some policies created, speeches made, and money allocated to exactly this.

Hopefully, both of these technologies will help provide the high-speed connections rural communities and businesses so desperately need across the country, as well as providing more fancy things like enhanced edge computing, smart cities and driverless car infrastructure.

Last year I predicted 2019 would be a bad year for legacy banking, with the door open to challenger firms in the mould of Monzo. The door has indeed been opened, but I didn’t anticipate that Big Tech would be the predominant force to bulldoze its way through.

Moving into 2020, we can expect the likes of Google, Apple and Facebook to aggressively pursue their respective financial ventures, exploiting the financial sector’s technological lethargy and susceptibility to disaster.

Once the flaws are ironed out, it’s inevitable that these companies will gain an even tighter stranglehold over their customers – embedding themselves into yet another aspect of people’s everyday lives. But this won’t come without heavy resistance.

With the threat of more than ten separate GDPR fines, too, hanging over its neck like the proverbial Sword of Damocles, Facebook’s long-running battle with authorities could become a lot messier and bloodier than we’ve seen before.

I’m hoping that 2020 is the year where we finally reach some kind of balance when it comes to gender equality, in not just the tech industry, but every industry.

I’ve been a tech journalist since 1999 and things were pretty dire back then. I remember being patronised in interviews and having supposedly complicated tech overly explained to me because my interviewee couldn’t possibly comprehend that as a little lady I was able to ‘talk tech’.

I’ve written before about how while things in this respect have changed, they’ve also stayed the same. But, as we all know, according to Albert Einstein “Insanity is doing the same thing over and over again, but expecting different results.”

As such, in 2020 and beyond we really need to be the change we want to see. I have to say, I am encouraged that we can and will do this. Indeed, I used to measure how far the industry has come in terms of gender balance by whether I had to queue for the toilets at events.

In 1999, I never had to queue. Fast-forward to 2010 and I, very rarely, had to queue behind one or two other ladies. In 2018 and 2019, particularly at cloud conferences, I had to queue for some time. That’s a fantastic problem to have. So – and you can quote me on this if I moan in the future – I’m looking forward to festival levels of queuing for ladies at tech conferences in 2020.