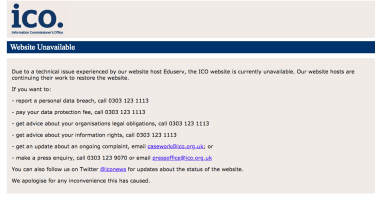 The Information Commissioner's Office (ICO) website has suffered an outage for more than 24 hours due to an "unprecedented" technical error experienced by the hosting company.

From yesterday morning businesses hoping to report a data breach or access materials and guidance on the ICO's website were met with an error notice blaming the outage on a technical issue with its website hosts.

Eduserv, the company that hosts the data regulator's website, told IT Pro its systems had experienced an "unprecedented electrical surge" at 8am yesterday that caused damage to some of its circuits. 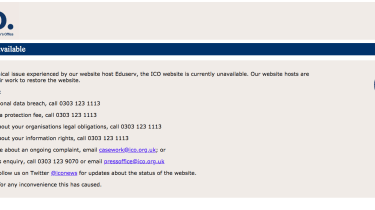 "Engineers are on site and continue to restore the affected systems and services," an Eduserve spokesperson said.

"An investigation into the cause is underway. Throughout the outage, we have remained in close contact with our customers, who remain generally understanding and supportive."

Neither ICO nor Eduserv could say when the issue would be fixed, but the data regulator said engineers had been working late into the night and that it remains in constant contact with the company.

"Due to a technical issue experienced by our website host the ICO website is currently unavailable," an ICO spokesperson said. "Our website hosts are continuing their work to restore the website. We apologise for any inconvenience this has caused."

The process for businesses wishing to report a breach has not changed, the spokesperson added, and they could do so by calling the ICO's helpline on 0303 123 1113. The volume of calls the phone line has received since the outage was first reported has also remained at roughly the same level.

Due to a technical issue experienced by our website host the ICO website is unavailable. Anyone needing to report a data breach can call our helpline on 0303 123 1113 from 9am. Our website host is working to restore the website and we apologise for any inconvenience caused.

Meanwhile, the ICO has been posting error messages routinely across social media to keep individuals and businesses informed throughout the outage - with the first message posted to Twitter at 9:15am. But that hasn't stopped users, such as Office 365 consultant Randy Perkins-Smart, from expressing their frustration at being unable to report GDPR-related issues via the website.

Was about to report something to the #ICO related to #GDPR but their web site is down. @ICOnews

The ICO's website previously experienced sustained outages on 25 May, the day the European Union's General Data Protection Regulation (GDPR) came into force. The regulator also found itself inundated with calls at the time from SMBs asking for guidance and advice on the new regulations.