False choices and clever designs are sending us towards a crisis, says ICO director. 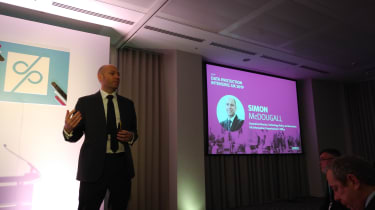 The Information Commissioner's Office (ICO) wants to rebuild trust in social media and technology companies, but according to one of its directors, its a losing battle.

These are the comments of Simon McDougall, the executive director of technology policy and innovation with the ICO, who believes that trust between the public and technology firms in deficit, and that deficit is widening.

"I think we are losing a battle," he said during the opening session of Wednesday's IAPP Data Intensive event in London. "A battle for trust. Everyday people, people out on the street, are losing trust with businesses, innovators and organisations with change.

"The reason we're losing this battle is that every time we create something cool, we're not bringing people along with us. So, they're not keeping up and this trust deficit widens and widens."

The cool things he mentions are the innovations currently taking the world by storm, advancing public lives and businesses faster than anything before it. From personal medicines that are not only adding years to lives but will add decades to children's lives by using the data of oneself or of other people to really understand which chemicals work best for individuals.

That data will also be revolutionised by 5G, which is potentially going to radically change how people interact with phones and devices, especially when they are outside of buildings and work. It will result in incredible rates of data download and low latency into external environments.

According to McDougall, this is both massively exciting, but also potentially extremely intrusive. And yet, with each of these changes, he believes the technology industry is failing to actually engage with people enough and bring them along and get them excited enough to buy into this technological shift in a positive fashion.

"The future people are often visualising is still different but it is less exciting and more dystopian," he said. "And we have got to work out how we actually engage with people on these questions of innovation otherwise we risk just building up this trust deficit to unmanageable proportions.

"At the ICO, we're seeing these issues round this trust deficit manifest itself in different ways. We run an annual track survey, every year and we ask people in the UK a whole range of questions around data and privacy. Right now, only 15% of individuals have high-level trust in social media firms and tech platforms."

It's a vivid picture of the current state of the technology sector, particularly if one thinks back to the mid-2000s when tech firms could do no wrong. Everything was exciting, new innovations such as the iPhones were met with celebration, but now it's less so according to McDougall as people are looking at things in a different way.

As proof of point, complaints to the ICO have more than doubled year on year to 113%. Of course, there's a GDPR effect in that statistic, but McDougall said the complaints the ICO is getting aren't particularly about GDPR issues. They're about old fashioned privacy issues; transparency, notice and unexpected outcomes from people using data. And yet, despite this, people are still using these services. They're not logging off, they're still going online and using social media services.

"People don't feel empowered enough to do anything about it and so they're carrying on," he said. "Acquiescence does not equal trust. We are still building up a trust deficit as we are building change. People are still using it because they don't feel like they have a choice.

"I think a lot of this is to do with false choices and clever design. The 'I agree' button that we all click on a zillion times on our apps and websites is one of the biggest lies on the internet. How many people are actually reading these things, how many are actually clicking, because it is quite scary how the muscle memory is building up as these hands are just clicking their way through."

McDougall said such a situation is not healthy for technological advancements and trust building, and as a result, it means the tech world and its users are heading towards a crisis point.

"We are heading towards a lack of trust in new technology and if we don't respond or act, then at some point we will reap the consequences."