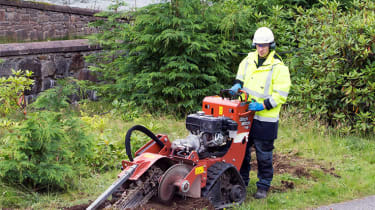 National infrastructure provider Openreach has expanded its full-fibre rollout programme to include 250,000 homes and businesses in more than 200 rural locations.

These locations, made up of market towns and villages -  such as Saxmundham in Suffolk and Aberdare in South Wales - were previously considered “too complex or expensive” to upgrade to the superfast network.

However, from testing different ways to install full-fibre networks in other rural areas of the UK, Openreach noted it has learnt to tackle the physical and economic challenges to rolling out fibre networks across the UK.

“Last year we put a range of innovations to the test with intensive trials in 13 rural communities. We tried out everything from ‘diamond cutters’ – a giant rotating blade that can slice through roads and pavements and slash the time it takes to deploy fibre cables by months; to drones that can fly fibre across rivers and valleys; and ground penetrating radar to guide to our diggers,” explained Kim Mears, managing director of strategic infrastructure development at Openreach.

“We’re doing everything we can to make sure rural areas don’t get left behind, because as an industry we need to work together to meet the Government’s gigabit connectivity ambitions,” Mears added.  “In the race to deliver Full Fibre to the nation we’re determined to make the digital divide a thing of the past.”

The move will further Openreach’s goal aiming to secure four million homes and businesses with access to full-fibre technology by the end of March next year.

Since initiating the project late last year, Openreach has been working at a swift pace; back in October, CEO Clive Selley reported the company was “passing around 22,000 premises a week with fibre – or one every 28 seconds".

The company plans to go even further, with hopes of reaching 15 million by the mid-2020s and ultimately the majority of the UK, “if the right investment conditions are in place”.

Government statistics reported that roughly 17% of the UK’s population live in rural areas. By targeting more isolated, less commercially viable communities, Openreach could upgrade hundreds of thousands of home and business networks, all of which hitherto - due to complications in geography; and in effect, expensive costs - have entirely lacked full-fiber connectivity.