View from the airport: Cisco Live 2020 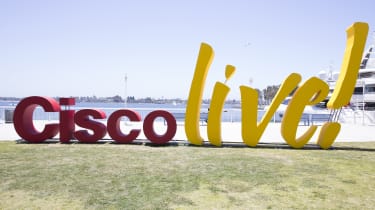 One of the first annual conferences of 2020 saw US networking heavyweight Cisco invite its European, Middle Eastern and Russian customers to Barcelona to showcase what it has in store for them this year and beyond – with strong emphasis on the beyond.

As this was my first Cisco Live, I can’t pretend it wasn’t a challenge acclimatising to the themes, as well as the jargon. The flu I’d been harbouring - and the resulting sputtering - certainly played its part, but the main source of difficulty came in wrapping my head around some of the more complex and mind-melting concepts that underlie Cisco’s ideas for the next generation of networking. The announcements to come weren’t ground-breaking in and of themselves, but pointed to a handful of ideas that feed into the company’s intriguing vision for the “future internet”.

This is a vision that abstracts humans almost entirely from the maintenance and servicing of the critical applications and infrastructure, which will rest upon a seamless mesh of interwoven networks. Why? With networks becoming more sophisticated and the multi-cloud environments in which apps and infrastructure reside becoming increasingly complex, the landscape will simply become far too difficult for people to manage as they’ve traditionally done. This is where supporting technologies like machine learning come in.

This idea underpinned some of the key innovations announced at Cisco Live 2020. The improvements to Cisco’s AppDynamics and Intersight tools, for instance, shift a large amount of the heavy lifting in network diagnostics and optimisation away from technicians and towards machines. The customer journey through businesses’ applications can be visualised on a user interface (UI), with IT teams able to pick out not just where there may be problems or bottlenecks in certain functions, but which elements of the infrastructure these functions are tied to. A recommendation engine rapidly churns through the problem to offer potential solutions to eliminate the issue. Sometimes it’s as simple as adding a terabyte of capacity to a virtual machine.

Similarly, Cisco touts its Edge Intelligence module for the Internet of Things (IoT) as a way to work around significant security concerns regarding connected devices. IoT devices are, VP for global security sales, John Maynard, suggested, largely insecure by design – which can give CISOs a major headache. Cisco’s platform takes much of the heavy lifting away from people, automating the process of determining whether new endpoints added to a network need to communicate with the rest of the network, and if so, then precisely to what extent.

Strangely missing from the company’s wider talking points, though, was the state of 5G. This was surprising to me at first because Mobile World Congress (MWC)  is only around the corner. On reflection, though, I realised this perhaps not because 5G is a sore point, but because there’s not really much to say. Adoption rates are moving at a slow pace in light of the dual fact that handsets aren’t widespread and the infrastructure is in the process of being rolled out. Moreover, the only official word the company offered on the UK government’s Huawei decision, which landed while we were out in Barcelona, is that it’s remaining neutral on the matter.

Nevertheless, while the opportunities of 5G remain in the “hype” bracket for now, the company was keen to tout the immediate possibilities of Wi-Fi 6, which runs on similar base-layer technology. Once 5G has got off the ground, these two innovations will tie together to form part of Cisco’s vision for the next-generation of networking, which may, in turn, open the door to exciting possibilities such as fully-free roaming.

Cisco Live offered a glimpse into the possibilities of what networking might look like not just by the end of 2020, but by the end of the decade. With the 5G hype train stuttering and stalling, the US tech giant used its EMEA conference to showcase its exciting long-term vision for networking; one that’s seamless, reliable and highly automated