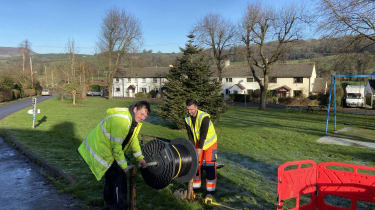 Despite anticipated complications in geography, Broadband Broadway has managed to connect its first rural customers to full-fibre networking.

Prior to the installation, most homes in Llandwei Rhydderch (known locally as the ‘forgotten village’) averaged networking speeds of under 1Mbps.

“We are very pleased to be building fibre networks in Monmouthshire, having been working closely for some time with Monmouthshire County Council and the Department for Digital, Culture, Media, and Sport (DCMS), developing the business and commercial case for Full Fibre in even the remotest rural areas,” said Broadway COO Barry Weaver.

“This is just the beginning: ‘full fibre’ is still only available across a fraction of Monmouthshire, Wales and the UK, and Broadway’s low cost, flexibility, and speed of deployment put in a great position to help deliver the Government’s ambitions for ‘Gigabit Connectivity for all’ by 2025.”

Broadway’s ‘entry-level’ service provides unlimited data at full-fibre speeds, with rates beginning at £24.99 a month on a one year contract. 300Mbps and 1Gbps tiers are additionally offered for £99.99 and £109.99 respectively.

In supplementing Monmouthshire with full fibre networking, Broadway now enters the second phase of its rollout plan, which will connect an additional fifty rural properties to network speeds capable of operating 1Gbps. Design is already well underway, and construction is set to commence at the beginning of next month.

By the end of 2021, Broadband’s Broadway plans to deploy its full-fibre network to a further fifty rural communities across Monmouthshire.