Stupendously low running costs can’t be sniffed at, but it’s still too expensive and overall performance is poor 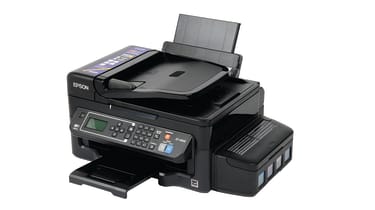 We all know how the "starter" cartridges bundled with inkjet printers tend to run out in a matter of weeks, pushing you onto costly replacements. Not so the Epson EcoTank ET-4500: it comes with enough black ink in the box to print 4,000 mono pages, and 6,500 pages' worth of cyan, magenta and yellow. Even better, it doesn't use cartridges at all: when you do run out, you can simply buy a cheap bottle of Epson-branded ink, tip it into the tank and keep on printing.

It's an approach that yields phenomenally low running costs: 0.2p per black-and-white page, 0.6p for colour. Several rivals work out at ten times the price, so, even though the EcoTank ET-4500 is a fairly expensive printer, it could pay for itself over time. After 10,000 mono pages, the cost savings make it substantially cheaper than many competitors.

Whether you'll ever get to 10,000 pages is another matter. The ET-4500 has a low recommended duty cycle of up to 500 pages per month; you only have to lay eyes on it to see that this isn't a printer intended for heavy workloads. The plasticky design is all but identical to that of the bargain-basement WorkForce WF-2630, with a low-capacity 100-sheet input tray and an output capacity of just 30 sheets.

It's achingly slow too. Our 20-page text document took two-and-a-half minutes to print, for an average print speed of 7.5ppm. Five pages of mixed text and graphics came out at 2.8ppm, and our photomontage took 1min 24secs to crawl onto the output tray. Those speeds are effectively identical to the WF-2630's, putting the ET-4500 on the bottom rung of every test. Even for a personal printer, that's too much waiting around.

You might hope that slow printing would at least be precise, but there's disappointment here too. Standard-mode text is scruffy, with jagged aliasing and misaligned verticals visible to the naked eye. You can read it, but it's not a pleasant experience.

Colour graphics are handled better. Epson's ink has a pleasing warmth to it, and colour gradients are reproduced very cleanly, with no conspicuous banding or stippling. It works the other way, too: scanned images were of top-notch quality, with excellent colour balance and minimal speckling. To reiterate, though, this isn't a machine for big workloads: our ten-page text document trundled through the ADF at a glacial pace, taking 5mins 22secs to produce a 200ppi greyscale PDF.

It's not hard to fathom what's going on here. As we've noted, the ET-4500 looks extremely similar to the budget WF-2630, and performs all but identically too. It also has the same low-rent feature list: although you do get a digital display, it's a distinctly low-res mono LCD - a far cry from the lovely touchscreens seen elsewhere. And if you want to print double-sided, you have to flip the pages by hand as they're printed. Effectively, we're looking at the same 60 printer, re-engineered to use high-capacity ink tanks instead of regular cartridges, and given a whopping price hike to offset the loss of revenue from future ink sales.

That's not necessarily a terrible proposition, but there are two problems here. The first is that Epson has set the price so high that it's almost impossible to recoup the initial outlay. At current prices, you'd have to print 42,500 mono pages to make the ET-4500 a better buy than the Brother MFC-J5620DW. The second problem is that the printer itself can't compete with its cheaper rivals on speed, text quality or features, which makes the whole deal decidedly unattractive.

It's cheap to run, but the absurdly high price, poor performance and lacklustre feature-set make this something of a false economy. 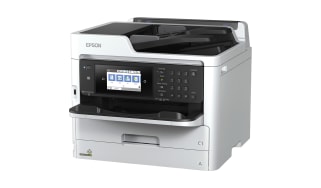