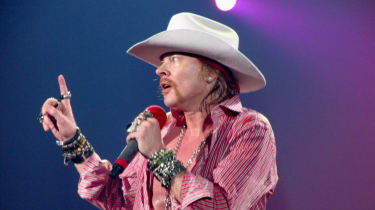 Guns N Roses frontman Axl Rose has attempted to use copyright infringement claims to remove an unflattering photo of him from the web.

The Digital Millennium Copyright Act (or DMCA) is a piece of US legislation that allows copyright holders to request the removal of copyrighted content from the web.

While this serves an important function in protecting intellectual property, it can also be used to unfairly silence criticism.

Rose has filed six of these requests against a photo from a Canadian concert in 2010. The photo - which is somewhat unflattering - has spawned a series of 'Fat Axl' memes relating to the singer's increased weight.

While the motivation behind the takedowns has not been made public, some have suggested that it is an attempt at stopping the deluge of images ridiculing the aging rock star.

The requests were filed on behalf of Rose by anti-piracy firm Web Sherriff, and all target examples of the same picture hosted on Blogspot and GoogleUserContent domains.

However, the original image was taken by Winnipeg Free Press photojournalist Boris Minkevich, who said that the only copyright being infringed is his. "The photo was stolen off our website with no permission granted by the Winnipeg Free Press," Minkevich told Torrent Freak.

All photographers at Rose's gigs are required to sign a contract passing copyright ownership to Rose's company, Web Sherriff told the publication, but the photographer cannot remember whether he signed one or not.

Ownership of the actual image remains unclear, but the debate has once again raised the issue of internet censorship. Free speech advocates have previously accused companies of using DMCA takedown requests to censor their critics.

For example, bogus DMCA requests are a favourite tool of companies wishing to remove YouTube videos which portray them in a bad light, and although YouTube has promised better protection for creators hit by these spurious requests, the problem still persists.

Google has not yet acted on Rose's requests to have the photo removed.