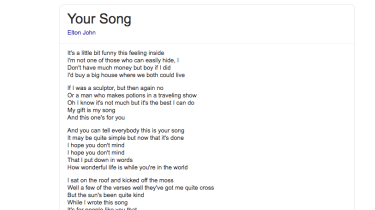 A company that specialises in song lyrics has accused Google of scraping data from its website to use in its search engine.

For a few years now, search for the lyrics to a song using Google Search, a little box will appear in the search results with the exact lyrics and details of said song. But, according to Genius Media, the tech giant has been copying these lyrics straight from its website for years.

In a statement to The Verge, Genius chief strategy officer Ben Gross said that the company has "shown Google irrefutable evidence again and again that they are displaying lyrics copied from Genius in their Lyrics OneBox".

"This is a serious issue, and Google needs to address it," said Gross.

The company has been around since 2009, starting out as a platform for "annotating clever rap lyrics" but has since expanded to other genres. It depends on Google Search to send music lovers to its website for lyrics to pop and rap songs that are hard to decipher - but now there is bad blood between the two companies.

According to the Wall Street Journal, Genius notified Google about the copied transcriptions as far back as 2017, and again in a letter sent in April this year. The letter reportedly warned that reuse of Genius' transcriptions breaks the Genius.com terms of service and violates antitrust law.

But, Genius actually first became suspicious about the source of Google's lyrics in 2016, when one of its software engineers spotted something odd about the song "Panda", a hit by rapper Desiigner. While many lyrics sites had published transcriptions of Desiigner's hard-to-understand lyrics with errors, Genius had the definitive version because Desiigner himself provided his lyrics to the site.

The complaints come amid growing concerns over the business practices of tech firms like Google, which denied any wrongdoing. But, in this example, they may have been caught red-handed.

In 2016, Genius said it had made a subtle change to some of the songs on its site, alternating the lyrics apostrophes between straight and curly single-quote marks in exactly the same sequence for every song. When the two types of apostrophes were converted to the dots and dashes used in Morse code, they spelt out the words "red-handed".

Google said the lyrics on its site were licensed from partners, not created by Google, but since the WSJ's report the company has posted a statement to say it's investigating the issues raised by Genius and would terminate its agreements with partners who were "not upholding good practices".

In 2016, Google forged a partnership with LyricFind, a Canadian company that secures deals with music publishers allowing companies such as Google to publish lyrics online. LyricFind Chief Executive Darryl Ballantyne said in an email that his company creates lyrics using its own content team. "We do not source lyrics from Genius," he said.