What is a Bluetooth mesh network? 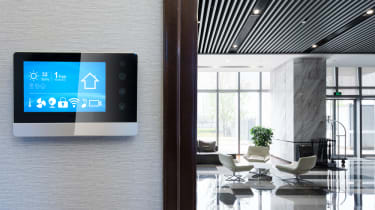 A Bluetooth mesh network is a way of linking devices together wirelessly inside a building, such as an office.

While Bluetooth as a technology has been around since the late 1980s, it has only been possible to use it as a mesh since 2017.

The technology used in Bluetooth mesh networks is Bluetooth 4, also known as Bluetooth Low Energy (BLE), which, as its name would suggest, has a very low level of energy consumption.

The Bluetooth Special Interest Group (SIG) describes Bluetooth mesh networking as "ideally suited for building automation, sensor networks, and other IoT solutions where tens, hundreds, or thousands of devices need to reliably and securely communicate with one another".

As with all mesh networks, Bluetooth mesh enables automated 'many-to-many' communication between nodes, such as sensors, servers or machines. While different technologies can do different things with this, use of Bluetooth mesh is most common in automating the basic systems of smart buildings.

"A lot of buildings are not that well integrated," he tells IT Pro. "A mesh networking system allows you to monitor and control your lights and your other systems and have them talking to each other and have sensors in real-time informing those systems what they should and shouldn't be doing."

Unlike the residential sector, where homes are integrated with IoT devices and controlled through voice commands, commercial environments are taking automation further away from human control. To the extent that changes go unnoticed.

"It's really simple," Woolley says. "The sun coming out from behind the cloud can cause the ambient light level in the room to get brighter, so the system turns the lights down, very subtly, in real-time and people don't even realise what's going on.

"There in this nice working environment where all the lighting is at just the right level for people to be comfortable and it stays like that throughout the day. Even when it is getting darker or it's getting brighter, the sensors in real-time are talking to the lighting controllers that act inside the lights talking directly to them."

In this case, lighting would act as only one element of a much larger network, allowing multiple autonomous applications to run simultaneously. Woolley calls it "orchestration" when all the systems of a building change in unison, and as the term suggests, the mesh network only uses one device to communicate with the rest.

"A collection of devices that are all within range of each other in a room, only one of them can use the radio at a time. If two devices transmit at the same time, the packet that they transmit will collide and essentially get corrupted and we lose it."

According to Woolley, the larger the packets the longer it will take to transmit and potentially occupying the radio for longer. If the radio is slow, it could take a while to transmit a packet, increasing the probability of bumping into another device that's trying to transmit.

Unlike Wi-Fi connected IoT, where devices like Alexa still call for human input, the Bluetooth version is completely automated. Sensors create an interactive environment that is virtually preemptive.

"You walk into a room and you're the first person in it," Woolley explains. "So an occupancy sensor knows you're there and it tells the network to switch to scene number three, which basically means the lights come on to just the right level, maybe the blinds come down, perhaps the heating comes up a touch.

"Lots of things all happen at once, sort of like telling things to all do something suitable, in unison. It's about automated, self-optimising behaviours with sensors and other things like machine-to-machine based devices, but it's all about how people interact with the building and how the environment is optimised."

Although still in its infancy, many office spaces, retail outlets and hospitals use a Bluetooth wireless mesh network and 360 million Bluetooth smart building devices are predicted to be shipped by 2022.