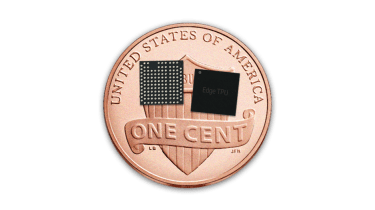 The Edge tensor processing unit (TPU) is an ASIC chip designed to handle machine learning models at the edge, upgrading IoT sensors from data harvesters to devices that can make inferences based on what they collect.

The idea is that by allowing much of the data analysis to occur at the very edge of the network, it's far easier and quicker to train the machine learning algorithms sat in the cloud. For example, a CCTV camera fitted with an Edge TPU chip would not only capture video, but perform facial recognition on the feed before it arrives at the server.

What's more, given that the chips are only making inferences rather than training the models themselves, they operate at a fraction of the power of machine learning hardware. Google was keen to show off that you could fit four Edge TPUs on a single US penny (see main picture).

The software connects to the Cloud IoT Core, a managed service Google announced last year that was set up to connect IoT devices directly to its cloud platform.

Google claims this will make it far easier for businesses to build use cases around machine learning - with a bulk of the data analysis being done at the edge, companies don't need to worry about maintaining reliable connections with the cloud, or worry about regulations that mean it's simpler for companies to comply by just storing data on-premise.

Cloud IoT Edge is capable of analysing images, videos, gestures, acoustics and motion locally on the device, the company claims. 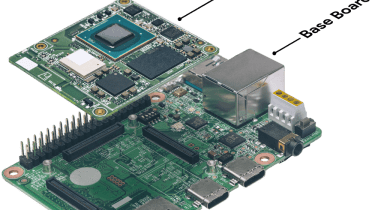 The Edge TPU development kit will be available in October

"We are the only cloud vendor today to have combined our AI research, our software research, and our hardware research to build together a hardware that is truly optimised for the latest and greatest AI technology," said Antony Passemard, head of product management for Cloud IoT.

"This is a game changer for IoT. This is really bringing intelligence to the edge in a very efficient manner in terms of watts consumed or price point," he added.

In order to test the new hardware and software, Google will be releasing a development kit in October that includes a system on module (SOM), featuring a quad-core CPU, a crypto-chip for added security, and the Edge TPU built in.

This SOM can be placed on top of a base board that the company has also developed, which will add connectivity options like Wifi and USB-C, as well as local storage.

For early access to the kit ahead of the October release, developers can submit a request through this form.