Acer launched a whole collection of Tempo branded smartphones at Mobile World Congress in February and now the devices are trickling into UK retailers as SIM-free only options. 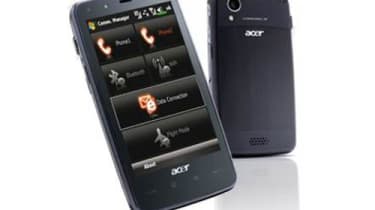 Back in March, Acer announced its attack of the smartphone market with a flurry of handsets, all of which it said would based on the Windows Mobile operating system. These are gradually starting to make their way onto the shelves of UK e-tailers.

The Acer F900 is one of these as it sports a full touchscreen behind which lies a healthy range of specifications including GPS, Wi-Fi, and both HSDPA and HSUPA support. The touchscreen takes up the whole front of the Acer F900, with only hidden call answer, end, home and back keys taking their place below the Acer logo. At first, these are a little confusing but as soon as you tap where they should be, they appear, as if by magic. The touchscreen itself is disappointing. It's resistive, which means it doesn't feature the same responsive levels as on capacitive devices like the iPhone. We even had problems aligning the touchscreen pressing firmly with the stylus wasn't even recognised until a full reset and even then the device failed to respond quickly. When it comes to how the touchscreen looks, that's a whole other story. It's on par with the HTC Touch HD, meaning you get a 3.8in display with a 480 x 800 pixel resolution. It does certainly look better than the display on the Acer DX900, and because of its large size, web page viewing is a breeze. Watching videos is also a joy, although there's nothing as advanced as a kickstand to enable you to watch a full feature length film in comfort.

Internet Explorer still isn't our favourite browser. It's sluggish and nowhere near as feature friendly as Opera or Skyfire but you'll have to download a third-party browser because only IE comes preinstalled. The Windows Mobile 6.1 interface itself is vastly improved by the addition of the Acer Shell. Although it's not as helpful as HTC's TouchFLO 3D, it's a fun feature that enables you to customise three different home screens to suit your needs throughout the day. It also consumes a large chunk of the device's memory leaving you with little space to add more third-party apps.