Acer claims its TravelMate Timeline business range offers all day working in a thin and light design. We took its 13.3in model for a spin to see if it lives up to the claims. 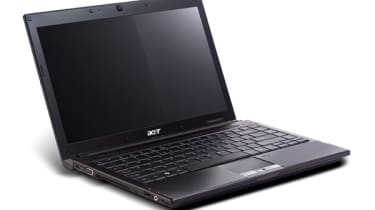 Some laptops make good impressions as soon as you pick them up. The Acer Timeline is one of those: it might not look like much, with its rather boring black plastic finish, but at only 1.6kg it's impressively light.

That's not all that's impressive: Acer claims more than eight hours' battery life from the TM8371, and all for well under the magical 1,000 mark.

The screen is excellent. It's bright and sharp, and offers decent viewing angles. The resolution is occasionally wanting, particularly with large web pages, but 1,366 x 768 is sufficient for most office tasks and also fulfils the requirements for 720p HD video. The integrated webcam though doesn't quite make the HD cut, as the resolution is just 640 x 480.

While the rest of the Timeline feels solid, though, we couldn't get used to the keyboard. Partly it's the size: the keys are particularly large and far apart from each other, which meant we were spreading our fingers uncomfortably wide.

It also feels cheap. The keys have hardly any travel, which makes typing unsatisfying, and we took a personal dislike to the rough matte finish. There is a small compensation on the far right hand side of the keyboard - the page up and page down keys double as function keys for controlling media playback. Also, the keyboard leaves no dead space: you even get dedicated Dollar and Euro symbol keys.

But if the keyboard is a dud, the trackpad has a few neat tricks up its sleeve. Aping the multi-touch trackpads on Apple's latest laptops, it offers you the ability to pinch to zoom in and out. This works well on things such as image previews, although it's a little less smooth with applications such as Internet Explorer.

Also, if you start dragging a finger down the right hand edge of the trackpad, you can describe a circle with your finger to scroll up and down a document or web page: a useful trick when navigating long documents. Finally, anyone who's grown frustrated at their mouse cursor leaping around a document while they type will appreciate the dedicated trackpad lock button just beneath the keyboard.

There are a few more shortcut buttons above the keyboard, the most significant of which is the PowerSmart button, which Acer claims allows the Timeline to deliver more than eight hours of battery life. We pressed it late at night, and waited for the TM8371 to run out of juice. We were still waiting the following morning, and then some. By the time the Timeline completed our light use battery test, it had been running for an extraordinary 10 hours 24 minutes.

Even pushed as hard as we could it ran for a little over three hours. With normal office use it's likely you'll see a time around halfway between the two extremes. That's still enough to allow you to forget the TimeLine's charger in the morning, work for a full day and plug it in in the evening. For those frequently away from the mains, the Timeline could be a Godsend.