Many smartphone makers (including HTC with Friend Stream and Sony with its now defunct Timescape feature) have tried to give users a single feed featuring regular updates from their social media and email accounts.

Aside from the drain on data allowance and battery life, these types of features can often prove to be invariably clunky to use and their constant flurry of updates an unwanted distraction.

BB10's BlackBerry Hub offers similar functionality, but is only directly accessible by swiping left to right, which minimises distractions and - using the settings panel - updates from certain sources can be easily switched off.

Hub can also be used to respond to emails, invite contacts to meetings and flag missives users may want to follow up on later.

The flagged content is automatically saved to a folder in  the device's Remember app, making it easy for business  users to retrieve important emails and documents without having to dig around too much. 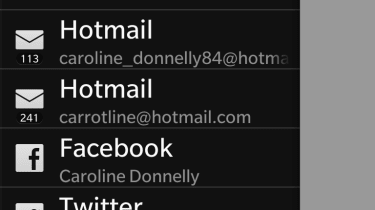