The inclusion of a QWERTY keyboard means that the display is not going to be as big as other handsets on the market. The Q10 packs a 3.1in Super AMOLED display with a resolution of 720 x 720 and a pixel density of 328ppi. With its aspect ratio of 1:1, the Q10's squared off display is different to 99.9 per cent of today's top flight devices, which tend to use 16:9 setups. 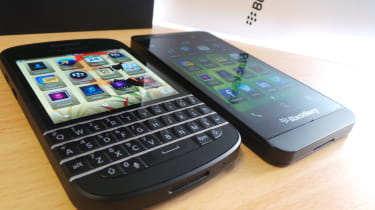 The square screen doesn't pose a problem web browsing, video, messaging, even gaming all work well. The only time you will run into trouble, however, is with apps: BlackBerry developers need to repurpose their existing Z10 apps for use on the Q10. Six Guns works on the Z10, for example, but has not yet been rejigged for the Q10.

Colours appear vivid and detailed for the most part, although whites as is often the case on most Super AMOLED setups are little off, appearing slightly yellow. The Q10's display is also highly reflective and this does cause problems when using the device in bright sunlight.

With the Galaxy S4, HTC One, and even the iPhone 5, you have devices designed to offer excellent video, web browsing and gaming capabilities. And that's great, but it's not what the Q10 is about. The Q10 is a messaging device, designed for people who need to communicate constantly on the move.

So if you're looking for a device that's both a solid work tool and a media player in one, then the Q10 is not for you.

The Q10 is born from the same design ethos as the BlackBerry Bold 9900 with its statesman-like demeanor. In a world of large-form handsets, the Q10 harks back to a simpler age where phones were professional tools, designed with work in mind, and not just gadgets designed for games, multimedia, and social networking.

And when the average smartphone screen size is 4.5in-and-up, it's a refreshing change, too. The Q10 measures in at 120 x 67 x 10.4mm and weighs just 139g. It does feel chunkier than its contemporaries but because of the nature of the handset, it's styling and iconic history, you find yourself perfectly at ease with it.

Featuring a stainless steel frame and a fiberglass backpanel complete with metallic edging, the Q10's 3.1in Super AMOLED is 30 per cent larger than the setup on the Bold 9900. 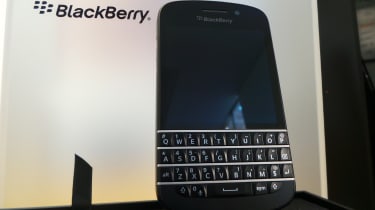 BlackBerry 10 is entirely gesture-based, so you no longer need navigation keys and trackballs. With these aspects gone you get more display, a better keyboard, and very little change to the overall size and weight of the handset.

BlackBerry refers to the fiberglass-like material employed on the Q10's backpanel as Glass Weave. The backpanel itself is soft to the touch, slides off completely to reveal the SIM tray, SD-slot and battery cell, and is slightly embossed to aid grip.

The Q10's keyboard is broken up by several metal fretboards similar to what we saw on the Bold 9900, however, here they're ever so slightly thicker and the keyboard itself looks as if it is fused directly with the Q10's steel framing. The overall finish is excellent.

Towards the top on the left side you have micro USB and a micro HDMI-out port. On the opposite side, the volume rocker and voice control key. On top, sits the power/unlock key and a 3.5mm headphone jack. Hidden away on the bottom of the device is a grilled stereo speaker for audio, notifications and speaker-phone conversations.