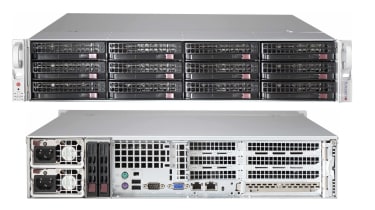 You're ready to start serving storage out of the box as WSS2012 is pre-installed. The price includes the Standard version which is packed with features including block level deduplication, thin provisioning, storage pools and SMBv3 and NFSv4.1 support.

It has an unlimited capacity license and doesn't need any CALs either. The clustering/failover features are ready to go as well so you just add hardware to use them. WSS2012 Workgroup edition is aimed at smaller appliances and limited to one processor socket, 32GB of memory, up to six internal hard disks and fifty user connections.

A valuable feature of WSS2012 is Storage Pools which allows you to combine physical disks of different makes and sizes. Similar to Synology's Hybrid RAID, you can use pools to create mirrored, striped or RAID-5 virtual volumes and expand their capacity by adding new drives to the pool. 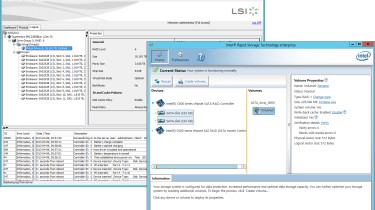 Prior to share and iSCSI target creation we needed to enable the Windows File and iSCSI Services which had been left disabled. This is easy enough to do and during this phase you can enable other storage services such as data deduplication and the File Server Resource Manager which you'll need if you want the storage reports, quotas and file screening features.

NAS performance is excellent with Iometer reporting high raw and read and write rates of 113MB/sec for a share mapped to a Dell PowerEdge R515 server loaded with Windows Server 2012. Real world performance was impressive as well with drag and drop copies of a 2.52GB video clip returning read and write speeds of 108MB/sec.

Data deduplication performance is vastly superior to ZFS-based storage appliances and on a par with more costly proprietary systems. When we ran the Binary Testing deduplication test suite against Broadberry's WSS2012-powered CyberStore 316S-WSS, it returned a high reduction ratio of over 7:1 for a one month backup simulation. 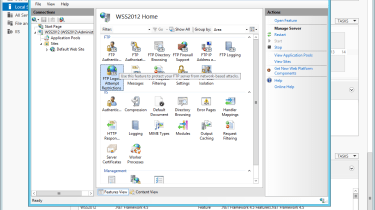 If you want to host FTP services you still need to install IIS but version 8, as provided with WSS2012, adds the new FTP Login Attempt Restriction feature. This allows you to set a threshold on the number of failed logins within a time period in seconds after which you can block the IP address or just log the details.

Performance is nothing to sniff at with the FileZilla FTP client uploading and downloading our test video clip at 109MB/sec. General NAS backup operations will be good as well with our 22.4GB collection of 10,500 small files copied at an average of 74.5MB/sec faster than most Linux based NAS appliances.

IP SAN targets are just as easy to create and a useful feature of Microsoft's thin provisioning is it works directly with storage pools so can be applied to shares as well as iSCSI volumes. Performance is tops with Iometer reporting fast raw read speeds of 113MB/sec over Gigabit for a 500GB target.

With the Standard version of Windows Storage Server 2012 included, the Igloo 2U-24T-Stor isn't found wanting for storage features. Capacity can't be expanded outside the box but NAS and IP SAN performance is excellent, Microsoft's deduplication delivers big savings in storage and it's good value as well.

This Windows Storage Server 2012 powered appliance is a good choice for SMBs as it offers a big capacity and heaps of features for the price. NAS and IP SAN performance is very good, it’s easy to deploy and use and is 10-Gigabit ready out of the box.