This 10in features Windows 8, a Wacom stylus and incredible battery life. 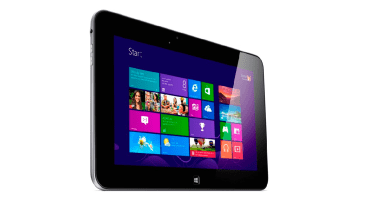 There's one downside to Dell's heavy duty battery though. The bulge on the rear means that Dell's case doesn't fit when it's in use. This design flaw is not the only reason why we're not too keen on the case. The soft plastic doesn't feel strong, it doesn't look stylish, and there's no sign of a keyboard, in stark comparison to the cases offered with Microsoft's Surface RT and Pro devices. 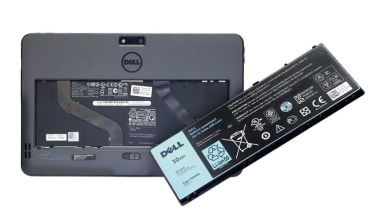 In an attempt to mitigate the lack of keyboard, Dell offers ships the tablet with a Wacom Active Stylus, which adds another layer of functionality to the Latitude 10. The device is pressure-sensitive, and supports right-clicking. A pad on the bottom of the stylus can be used as an eraser, too - a boon when working with graphical applications.

An Intel 1.8GHz Atom Z2760 processor powers the device, so it's not as powerful as an Ultrabook. But then you shouldn't expect it to be. The Latitude 10's score of 0.22 in our application benchmarks is enough to run basic work applications, games and Modern UI apps without fuss, and the OS scrolled smoothly. It's not able to handle intensive work applications, though, and performance wasn't quite as good in desktop mode: when opening folders and scrolling through files, the Dell was noticeably sluggish.

Plenty of laptops and tablets have claimed 'all-day battery life' over the years, but the Latitude 10 is first one that's truly delivered.

But this isn't a tablet built for speed, it's designed for longevity. The Latitude 10 delivered the best battery life we've seen from any Windows 8 device so far.

With the standard two-cell battery installed, the Dell ambled to a light-use benchmark result of 12hrs 35mins impressive enough. With the four-cell pack crammed into the rear panel, the Dell lasted for a ridiculous 27hrs 8mins. Plenty of laptops and tablets have claimed "all-day battery life" over the years, but this is the first one that's truly delivered.

The rest of the Latitude's specification ticks most of the business boxes. The stylus comes with Wacom digitiser support, the 802.11n wireless is dual-band, and there's also the option of mobile broadband, with a SIM slot underneath the battery. TPM 2.0 handles security, and there's GPS inside too. Storage comes from a 64GB SSD, which is a little tight enough for work, but not enough for much else.

The display's 1,366 x 768 resolution is nothing to shout about, but it's a good-quality panel. Its brightness of 448cd/m2 ensures it'll be legible under the brightest of office lights, and the average Delta E of 5.2 ensures reasonable colour accuracy. It's not got the sheer quality or resolution required for demanding work but, as an everyday business device, it's more than capable.

There's plenty to like about the Dell, but the accessories mean the costs mount up quickly. Our standard-edition tablet with Windows 8 Pro and the larger battery fitted clocked in at 617 exc VAT, with the breakdown as follows: 516 tablet plus 45 for Windows 8 Pro, 23 for the four-cell battery and 33 for the unlocked SIM slot.

The dock costs another 107, the stylus is 30 extra, and the case adds 32 to the Dell's bottom line. This bring the total to 786, before taxes are added.

Dell sells a couple of different Latitude 10 specifications. The Essentials-edition strips out the removable battery and Wacom stylus support, and the price drops to 375 ex VAT. There's the NetReady version, too: it costs 549 ex VAT but comes pre-installed with an O2 SIM card. It's used on a pay-as-you-go deal: one day of access with a 250MB download limit costs 1.89, and monthly deals with 2GB and 10GB data limits cost 13.89 and 29.89 respectively.

No other Windows 8 Pro device offers what the Latitude 10 does: stunning battery life, versatility, decent hardware and several useful accessories. If current Windows 8 devices don't tick the business boxes, then the Dell is a great option expensive but with plenty of justification in all of the right areas.

The best Windows 8 tablet to-date, this Latitude 10 from Dell offers incredible battery life, and decent performance. Price can stack up quickly if you plump for the many accessories, but it could be worth it.