The toughest Ultrabook on the market. But has Dell had to sacrifice performance? 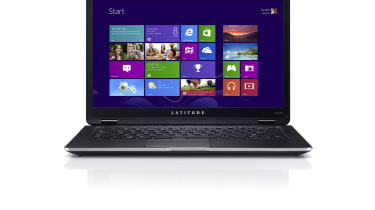 Intel has pumped a colossal amount of cash into consumer Ultrabooks, but business editions are hard to find. Dell has finally launched its first corporate Ultrabook, and the Latitude 6430u look like it's worth the wait.

The Latitude 6430u is tougher than any Ultrabook because it's passed the MIL-STD-810: a set of tests that adhere to the United States Military Standard. They're designed to simulate a broad range of environmental conditions and make sure products can withstand extreme. Dell has dialled down onto the "G" category, which subjects new products to a battery of laboratory tests.

The Latitude has undergone passed 16 tests and is certified to withstand extreme altitudes, high/low temperatures, humidity, dusty locations and more than its fair share of drops, shocks and vibrations.

Dell's laboratory testing is one thing, but we're pleased to report that the Latitude lives up to its billing in real-world use. It's a tough piece of kit, with barely any give in either the base or the lid no matter how much we flexed. There are neat touches throughout; the display is inset from the bezel so the keyboard isn't damaged, and the metallic borders around the device are made from Magnesium alloy. 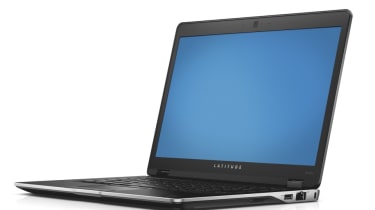 The military-standard design also make the Latitude practical. The keyboard is a standard Scrabble-tile unit, and it's backlit for low-light visibility. The concave keys are comfortable with a crisp, light action, and there's a Lenovo-style trackpoint in the middle of the keyboard that's responsive and accurate. The traditional touchpad is sandwiched between two pairs of mouse buttons, and they're similarly light to the touch. The touchpad works with all of Windows 8's edge-swipe gestures.

There's a downside to all of the practical design: this isn't pretty device. It's made from a selection of matte black panels, with those Magnesium bands the only aesthetic touch, and there's no room for finery. The 22mm-thick Dell is chunkier than most Ultrabooks, and its 1.6kg weight puts it into the top tier of these slimline laptops.

The Core i5-3427U is the chip of choice for Ultrabooks. It's a 1.8GHz part that sits towards the top of Intel's low-power Ivy Bridge range, and it's got a decent specification: two cores, a maximum Turbo Boost speed of 2.8GHz, and the HD Graphics 4000 integrated GPU.

It's combined here with 4GB of DDR3 RAM and a 128GB PM830 SSD, and it returned an application benchmark score of 0.69 as good as it gets for this generation of Ultrabook. It's worth mentioning that SSD, which is blazingly quick it scored 459MB/sec and 231MB/sec in the AS SSD sequential read and write tests. The end result is a system the boots and loads swiftly and shows no hint of struggle until it's asked to run intensive workplace software. 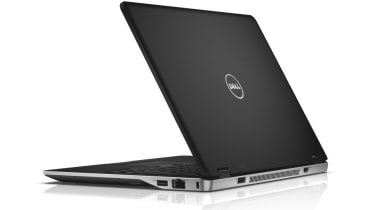 The nippy specification is assisted by a capable specification. Intel vPro aids office manageability, and Gigabit Ethernet, dual-band 802.11n wireless and Bluetooth 4 handle connectivity. TPM 1.2 provides a little added security, and a reasonable selection of ports and sockets is scattered around the Dell's borders: three USB 3 ports, an eSATA connection, SD card reader and both S-DUB and HDMI display outputs. There's a physical Wi-Fi switch on the side of the machine.

The six-cell battery puts in a good shift. It lasted for 10hrs 51mins in our light-use benchmark, which browses web pages with wireless turned off and the screen calibrated to a brightness level of 75cd/m2. That's twice the lifespan of the Microsoft Surface Pro, but the Dell Latitude 10 tablet, with its extended and replaceable battery.

If there's one disappointment, it's the 14in screen. We like the matte anti-glare finish, and the resolution of 1,600 x 900 is enough to make the panel feel pin-sharp. The brightness level of 344cd/m2 is good, too, and ensures the panel will remain legible under bright office lights. The big problem, though, is poor image quality. The measured contrast ratio of 191:1 means the colour gamut is narrow, and black levels aren't deep at all the whole screen looks lifeless. The average Delta E of 10.3 means that colour accuracy is wide of the mark, too. It's fine for general work, but this panel isn't cut out for graphical tasks.