The reborn Gateway now has its first products available. Is this 12in notebook good enough to make an impact? 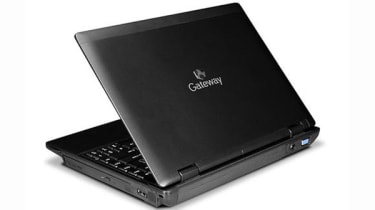 The keyboard is also less than perfect. The keys have a solid-feeling base, but they don't travel very far, which makes typing sometimes feel a little constrained.

We also dislike the apparently-random approach taken to key sizing: the enter and right-hand shift buttons are standard sized, but to cram in a set of page control buttons on the right hand side the colon and apostrophe buttons have taken a whack and are only a little larger than half normal size. The trackpad is reasonable: the buttons are nothing special but they do at least offer a definitive click and have a fingerprint reader between them.

It's the Gateway's finish, more than its build quality, that gives the game away. Everything is finished in dark grey, light-absorbing plastic and there isn't a single concession to good looks made anywhere on the body. It's functional, but incredibly dull to look at.

It is at least light at 1.95Kg with a 6-cell battery and a still reasonable 2.10Kg with a 9-cell, which our sample had. Either way, it's compact enough to stuff in a bag when you're in a hurry.

There's plenty of interest around the chassis, though. The memory card reader on the right hand side is compatible with SD, MMC, Memory Stick and xD cards, which neatly covers all the bases you'll find with compact cameras.

There are also three USB ports, although a minor note of annoyance is down to the fact that they're all mounted on the side. The optical drive is a useful model that can write to all manner of disc including DVD-RWs.

It's no surprise at this price to find a lack of digital display ports, with just a single D-SUB port on the back - no HDMI or DVI here. It will suffice, even if users occasionally find themselves needing to delve into the settings menus on external displays.

Our review unit came with a 2.6GHz Intel Core 2 Duo T9500, which returned a good overall benchmark score of 1.46. Things are helped along immeasurably by the hefty complement of RAM - 4GB means that running Microsoft Office or a massive Outlook inbox on this system will be no problem.