Computers for such a critical task aren't simply delivered at the venues, unboxed and plugged in though they have to be rigorously tested to minimise the risk of anything going wrong. Before deployment, all of the computers and equipment used to keep score for a particular event or application (such as Archery or Fencing for example) are set up at the London-based Integration Test Lab (ITL). These combinations of laptops, desktops, servers (around 20 in total) and installed software, or 'cells', are set up exactly as they would be at the venue. The ITL, housed in an unassuming office building, can house dozens upon dozens of cells. 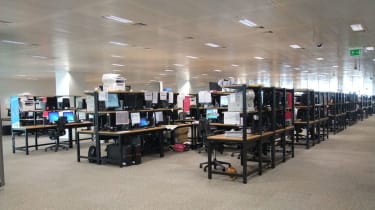 A handful of the countless cells, or collection of computers dedicated to a single event or other purpose, being tested at the Integration Test Lab.

Each cell is configured as they would be at the event and are vigorously tested and documented before being moved to the venue 2-3 weeks before the actual event. Each cell is then tested again. Feedback is collected from the onsite operators before the cell is moved back to the ITL and any necessary modifications are made. Only then is the cell ready for final deployment.

The ITL has been operating since the autumn of 2010, although deliveries of computers were being made as early as the second half of 2009. Despite this extended time frame, the configuration of every single computer is exactly the same. Although this means some of the specifications are comparatively modest compared to the latest models, this ensures that a broken computer can be replaced with an exact duplicate, speeding up recovery time. More importantly, the decision to use compact Acer Veriton mini PCs instead of traditional towers not only reduces energy usage, but increases the number of computers that can be delivered on a shipping pallet, saving both money and time. 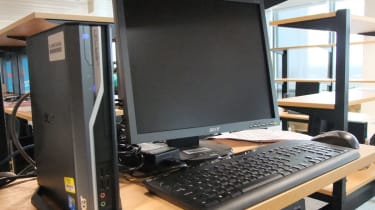 One of the many Acer Veriton PCs that will be used at the London 2012 Olympic Games.

Although Acer has all the replacement parts it needs, the goal in the event of equipment failure is to replace the entire faulty computer within minutes, conditions at the venue permitting, according to Trainor.