HD video conferencing: As good as being there?

Is high-definition video conferencing finally good enough to make up for not meeting in person? 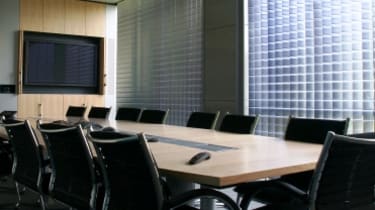 In a Halo room, even the finish on the table in front of the screens is designed not to cast too many reflections and the front wall is a shade lighter than the rear wall so it tones with the life-size image of the rear wall in the room you're looking at on three HD plasma screens. The table itself doesn't go all the way to the screens, because HP found this tended to make users seasick.

The details of the experience were fine tuned with the help of the first Halo customer, who has plenty of experience making things look good on a big screen. DreamWorks uses Halo to keep up with the punishing schedule of releasing two animated films a year. Halo meant Jerry Seinfield didn't have to leave his New York office and travel to California for meetings about Bee Movie.

Pepsico still sends executives and sales teams to meet customers, but they have more time to do that because they do internal meetings using Halo. HP uses Halo internally and credits the 30 rooms it has installed with getting one product to market six months earlier than if engineers had been flying between California and Singapore. A new Halo room might get used for 40 or 50 hours of meetings a month, but the average at HP is 200 hours a month, which means the room is in use 10 or 12 hours a day. "The Halo rooms are not used by executives," says Halo general manager Ken Crangle. "They're used by engineers and marketing. They're used by people who would never have travelled."

AMD's Halo users used to travel; the company was able to get rid of corporate flats it kept for visiting employees. HP itself saves around $300,000 a year on travel. You'll need to save money with Halo - prices have halved since HP first introduces it but a room costs around $250,000 (more if you include a camera that transmits images of objects you place on the table to the fourth screen usually used for sharing documents and presentations).

Plus, there's a monthly operations fee of $18,000. For that, HP runs the network that Halo connects to via a 45Mbit T3 (each of the three screens need 6-8Mbit of bandwidth). The speed is crucial for body language to come across says Crangle: "It's got to be lifesize, it's got to be instant so it's got to be fibre."

That's why the screens are plasma, with a 40-60 millisecond response time; the video has to reach the other room within 250 milliseconds, including encoding, encryption and decoding.

Cisco's TelePresence system is similar to Halo, from the maximum latency of 250 milliseconds to the spatial audio and the three 65" plasma screens over the table, "because two reasonably normal sized people can fit in that size comfortably," says David Hsieh, director of marketing for TelePresence.

The $299,000 price tag is similar too. Again, the lighting is custom designed. Steven Spielberg's cinematographer Janusz Kaminski suggested brown walls rather than blue and lighting from the front because overhead lights give you unnatural skin tones and shadows on the screen.

There are small differences, though. HP puts a fourth screen for shared documents above the participants, Cisco puts it below. The camera is mounted on the central screen. That's more intrusive than the three cameras that Halo uses which are above each screen, mainly because it reminds you that the person you're talking to isn't actually in the room with you.

Problems getting meetings started have put many executives off traditional video conferencing. The controls for Halo are straightforward and the system checks itself when you turn it on. TelePresence integrates with Microsoft Outlook and you can schedule meetings by booking two rooms rather than one then start the meeting by dialling on a standard office phone; the system is a SIP endpoint and Hsieh jokes that it's "the world's most expensive telephone."

Talking to other people

One major difference from Halo is that you have run your own network for TelePresence, which is why it's more complicated for Cisco to develop HD interconnections. You can reach any Halo room from any other, so you can use the system to talk to customers and partners who've invested in it, and it can also interconnect with Tandberg systems.