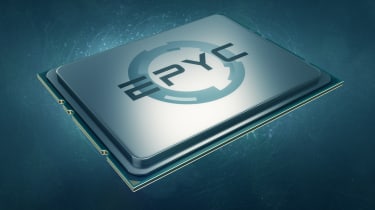 Had it not been for a phone call in a McDonald's drive-through, way back in 2014, this past year could have been very different for AMD.

On one end of the line, Dr Lisa Su the newly anointed CEO of AMD. On the other, an executive who had just taken early retirement from Dell.

"I was in the drive-through line, one week after my retirement," says Forrest Norrod, now senior vice president and general manager of the Datacenter and Embedded Solutions Group at AMD, "and I picked up the phone. It said 'Lisa Su'. I went to see her the next day."

It turned out to be a fateful call. As the man responsible for managing all aspects of AMD's strategy, engineering and sales for data centre and embedded products, Norrod has been key to the company's re-emergence as a noteworthy force in server processors.

The company has managed to reverse its ailing fortunes in this market, and although AMD only makes up around 1% of the server processor market according to figures from Mercury Research, the fact that there are strong rumours that Intel is discounting Xeon chips in response to the EPYC line indicates that AMD is doing something right.

In order to get to the point where it can once again be considered a credible rival to Intel, Norrod says there were some issues that had to be corrected, and certain elements of the company had to be refocused. Norrod isn't just talking about moving to a new architecture but moving to a new culture one based on engineers.

"Rory Read was CEO [of AMD when I was at Dell], and Rory defensively saved the company in a very bad situation. He saved the company from going bankrupt, no question about it. But he wasn't a product guy. He wasn't an engineer. He didn't have vision of what to do."

Dr Su, on the other hand, has had a long and storied career on the engineering side of semiconductor development. When she told Norrod in 2012 that AMD was planning to scrap its server roadmap and start from scratch, he says that the decision "spoke volumes to me about the type of leader that she was".

It was also evidence of a change in attitude, Norrod explains, as AMD became more realistic in its ambitions. Norrod uses his two sons as an explanation; his younger son was always wanting to do what his big brother was doing, despite the fact that the two and a half year age difference between them made it impossible.

"AMD acted that way for a long time," Norrod says. "'Intel has all these markets, let's go try and be in all these markets!' [AMD] had resources to try and do four well, they were trying to do eight. They would cancel two of them, and they would have six half-assed products come out late, and undifferentiated. And that's a prescription for disaster."

To illustrate this, Norrod gave the example of machine intelligence. He admits that AMD is "late to the game", but explains that it was a deliberate decision. "We simply didn't have the money to put into the software engineering early enough." Instead, AMD chose to invest its energy in the development of Zen and its next-generation GPU core.

The first clear sign of AMD's new thinking came with the 2017 release of EPYC, its range of processors for servers and data centres. As previously discussed, it has been making small but significant gains in market share, but more importantly, Norrod says EPYC has been finding a warm reception among partners, systems integrators and OEMs, who have welcomed AMD with open arms.

"Generally, it's a 'big hug, we want you.' But that and five bucks will get you a cup of coffee at Starbucks. If we didn't have a part that was real and differentiated, it still wouldn't translate into anything. There's no pity sockets out there," Norrod points out. "You need to identify what customers want and the good thing is, in the data centre, even if they can't tell you, they can tell you their TCO equation."

"And then, the other, maybe most important thing, is figuring out what competitors don't want to do," says Norrod. "Not what they can do and can't do, [because Intel] can do anything. Anything we can think of doing, they can do it - they can do it better, they can do it faster. They've got far more resources than we have. So, instead, what do they want to do and not want to do?"