IBM is late with support for Intel’s Series 5500 Xeons but does this 1U rack server has the measure of Dell’s and HP’s new systems? 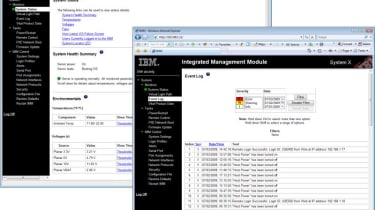 For initial server configuration wave goodbye to the BIOS and say hello to IBM's new UEFI (unified extensible firmware interface). This provides access to a setup menu for general server configuration, a boot device manager and a smart diagnostics GUI. This is similar to that provided with the new PowerEdge servers but Dell does go much further as its Lifecycle Controller offers features such as server update tools and the ability to store device drivers for immediate availability.

To install an OS locally you still need to boot the x3550 with IBM's ServerGuide disc Dell's Lifecycle Controller has all these integrated. IBM doesn't supply ServerGuide as standard anymore so it must be downloaded first and we recommend doing this in the wee small hours as IBM's support site is seriously slow during normal working hours.

Nevertheless, we found ServerGuide easy enough to work with as it provides access to the RAID controller for array setup and, once you've added all your user details, it'll get on with installing your chosen OS where the remainder of the process is largely unattended.

For full remote server access, IBM takes a leaf out of HP's book as it's dumped its optional RSA (remote supervisor adapter) card and replaced it with an embedded IMM (integrated management module). which presents a dedicated network port at the rear. Essentially, this provides the same web interface as the RSA, offers an enhanced feature set and can be upgraded to a premium version, which adds remote control, virtual boot media and OS failure screen capture.

For general systems management, IBM's Director also gets its marching orders as it's been replaced with Systems Director 6.1. This is a much needed improvement as Director has been looking long in the tooth for a while now. System Director provides a much smarter browser interface and starts with a network discovery routine. Agents are provided for IBM and non-IBM systems and you can collect inventory data, set up an alerting system, run file transfers and fire up remote control sessions using RDP or RealVNC.

Power management doesn't get off lightly either as the new Active Energy Manager plug-in replaces the PowerExecutive utility. This interacts with the server's BMC and provides power capping along with trend graphs of power consumption and system temperatures over time.

The x3550 M2 delivers a good overall package for the price but IBM hasn't gone as far as HP or Dell with design innovations and new features. The new management software and embedded IMM controller are much needed improvements but we still rate Dell's PowerEdge R610 as the best 1U rack server currently on the market.

IBM has made significant steps forward with its latest ‘system x’ servers and the x3550 M2 offers a good expansion potential, whilst remote management tools see significant and timely improvements. It’s well designed with a low power requirement and equally low noise levels but has to settle for a close second to Dell’s new PowerEdge R610 for value and features.