While iOS and (most) Android devices rely on swipes and a liberal use of the home button to negotiate, navigating the BB10 requires a mix of left, right, up and down gestures, which take a little while to get your head around.

A swipe up from the bottom of the screen unlocks the device, while a downward flick reveals at-a-glance information about Wi-Fi connections, upcoming alarms and enable access to the sound settings.

A swipe from right to left reveals the app tile screen, while the reverse action takes users to the BlackBerry Hub.

Handily, the company has included a tutorial that plays through the first time you turn the Z10 on, but - after a bit of playing around with the device - the gestures soon become second nature.

The homescreen is consistently changing as it displays the last eight apps you had open. BlackBerry claims that the majority of users use only a handful of apps and this will help them gain access to them. 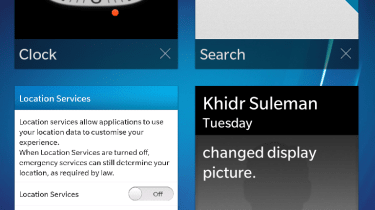