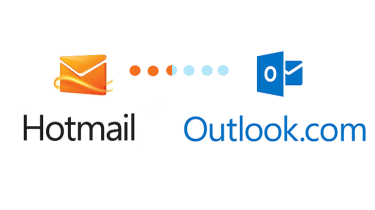 Hotmail was one of the first free online email (aka webmail) services to launch following the popularisation of the internet that wasn't linked to an ISP. It was originally released as an independent platform on 4 July 1996 and following rapid growth was bought by Microsoft in December 1997.

Hotmail had a couple of iterations over the years since the Microsoft purchase, first becoming MSN Hotmail then later Windows Live Hotmail. This latter upgrade, which was announced in 2005 and completed in 2007, was significant itself, representing a ground-up overhaul. It was also the first time Microsoft thought about killing off the Hotmail brand, but backtracked after the new proposed name, Windows Live Mail, caused some user confusion.

Finally, in 2012, Microsoft decided to bite the bullet with a second major overhaul when the email service was migrated to the company's Office 365 infrastructure and the branding changed from Hotmail to Outlook.com (a change that took about a year to complete). The new name reflected the company's efforts to unify branding across its desktop and cloud-based software offerings. While perpetual license holders and Office 365 subscribers got Outlook, Word, Excel and so on, users of the free tier of Microsoft productivity services had Word Online, Excel Online and now Outlook.com.

Microsoft implemented a much more aesthetically-appealing user interface (UI) for Outlook.com compared against previous Hotmail design iterations. This new look was based on the Windows 8 tablet-first tile-based layout in order to signify unity between Microsoft's products. Many advanced users, however, found the UI frustrating to use and not appropriate for in-browser user experience (UX), arguing the benefits in terms of UI simplification were not worth the navigation difficulties.

User feedback led to a suite of new add-ons, meanwhile, like an advanced search feature as well as a secondary inbox, more templates and closer integration with Microsoft's web-based tools like Bing Maps. Skype, too, became more closely wrapped into the firm's emailing system with users given the tools to communicate via speech in such a way that the company was positioned to compete with Google and its Hangouts app. Google Drive was also targeted with Microsoft's own version of document-sharing, while email attachments could be edited in the body of a message without downloading and reopening files.

Many Hotmail users were taken by surprise despite Microsoft's attempts to publicise the transition at the time, with loyalists expressing shock at being met with the Windows 8-esque tablet UI when logging into Outlook.com for the first time. The UI has evolved drastically since it debuted, however, to more closely resemble the updated Windows 10 and productivity suite design scheme - deemed far more palatable.

Moreover, a host of premium features are on offer, including advanced protection against malware and phishing, ad blocking, 1TB of OneDrive storage, and offline email access on PCs and Macs. Premium customer support is also on offer for people willing to shell out a monthly or yearly fee for premium privileges.

The great Hotmail to Outlook.com migration started at the beginning of 2013 after a preview in which Microsoft could test out its functionality and garner feedback from users. Microsoft took user comments on board to improve the service before launching it worldwide and moving users off Hotmail,  said David Law, director of Outlook.com product management, back in February that year.

"Through the preview, we've heard and learned a great deal about your favourite features and how well Outlook.com is delivering on our vision for modern email," he said.

"And a number of people have expressed appreciation that Outlook.com replaces advertising with the latest updates from Facebook or Twitter when they're reading email from one of their contacts."

The launch was backed by a major marketing campaign to promote the service, but not every former Hotmail user was happy with the forced migration to Outlook.com, with many dissatisfied with the initial user interface, and some functionality.

In recent months and years since the migration to Outlook, Microsoft has included a number of features to improve the overall UX, largely in response to feedback from its users. One of the most prominent examples of a UI change has been the introduction of a dark mode' with a revamped colour scheme, rolled out in July.

A host of new features in Outlook have subsequently been rolled out to improve its interface and design, largely in response to a recent Gmail overhaul that's seen key design and functionality improvements.

Among the string of changes, since Outlook was first launched, include bill reminders appearing as entries in a user's calendar, whether this takes the form of subscriptions or monthly payments. These are similar to travel reminders, with Outlook detecting a transportation booking (a flight or train journey, for example), which are added as calendar entries. Users are also reminded two days before the bill is due so payment can be issued in time. These calendar improvements also introduce more detail to entries, with aspects like venue populated by the Bing search engine.

Customisation, too, has seen a huge focus from Microsoft, with users able to add more items to the Outlook ribbon, and the ability to add multiple accounts, folders, and tabs to switch between email, calendar and address book.

In more recent months, Microsoft has rolled out features like a focused inbox', which automatically filters any messages deemed not pertinent or useful, with this content instead found in an other' inbox. Outlook can also read email messages out loud, and includes one-click functionality to improve accessibility.