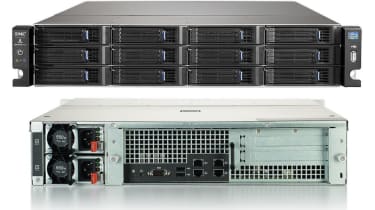 For general NAS and IP SAN operations, Iomega's firmware tweaks have paid off as this system is fast. Using a Dell PowerEdge R515 server loaded with Windows Server 2012, we saw drag and drop copies of a 2.52GB video clip return read and write speeds of 103MB/sec.

FTP operations were slightly faster with Filezilla reporting upload and download rates over Gigabit of 107MB/sec. Even our small file copy test didn't flummox it with the 22.4GB test sample of 10,500 files copied to the appliance at a speedy 72MB/sec. IP SAN speeds are also up to the limits of Gigabit with Iometer reporting fast 113MB/sec read and write rates for a 500GB target. 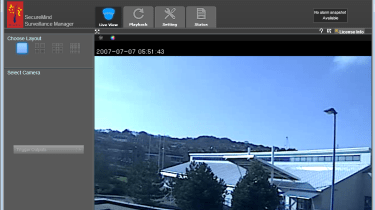 Surveillance features have been improved as Iomega has replaced its own software with the SecureMind Surveillance Manager. Along with support for a lot more IP cameras, it adds features such as motion detection triggers but you only get one camera license included with an extra four-pack costing around 110.

Virus scanning is also new and comes courtesy of McAfee's VirusScan Enterprise for Linux. It has its own management console where you can view the proceedings, configure real-time scanning and create on-demand scans for selected shares.

The StorCenter px12-450r comes up short on features when compared with Netgear's ZFS powered ReadyData 5200 as this offers deduplication, iSCSI thin provisioning, SSD caching and support for two external expansion shelves. However, the StorCenter is well suited to SMBs as a central backup system as it's good value and the new hardware specification delivered impressive speeds in our real world throughput tests.

The StorCenter px12-450r is undeniably fast over Gigabit and its low price makes it a good choice as a central backup system for SMBs. Storage can’t be expanded outside the box and it lacks USB 3 and eSATA port, but it does offer plenty of backup tools and good support for cloud services.