Is Toshiba rebooting the format war?

In the aftermath of Blu-ray’s victory over HD DVD, Toshiba doesn’t seem to be taking things lying down. It's hatching a plan for optical storage. 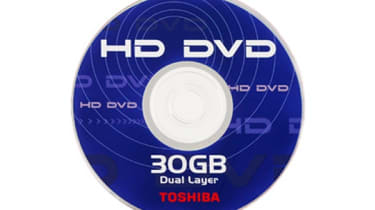 Back in January, when Warner Bros made its pivotal announcement that it was exclusively backing Sony's Blu-ray format over HD DVD, it effectively brought to an end the high-definition format war, and not before time.

For no matter which camp you happened to support, the one clear message that was coming through from muted take-up of both - and the falling sales of DVDs - was that confusion was reigning, and a winner needed to be crowned.

The story goes that right up until the last minute, it was unclear as to which format Warner Bros would choose to exclusively back, but courtesy of some apparently frantic negotiations on the eve of the Consumer Electronics Show in Las Vegas, the eventual scene of its announcement, it chose its to go for Blu-ray. In the weeks that followed, many companies be they smaller film distributors, retailers or rental services made a similar call, and the writing was very quickly on the wall for HD DVD.

Toshiba waited until February, when the message was coming through loud and clear in spite of a raft of hardware price cuts, and confirmed that it was abandoning its HD DVD format. Blu-ray was the clear winner, and while it's taken some time since then to get some proper momentum behind the format, it's in shape now to have a real crack at the lucrative back end of the year market.

Toshiba, as you'd expect, is hurting. Profits have been severely hit by the investment in HD DVD, and as a major player in home entertainment electronics, you would suspect that it would be wise to recoup some of its sales by plunging head-first into the Blu-ray market. But apparently, it's not to be. In fact, more than that, rumours persist that Toshiba still has the potential to muddy the waters a little.

The first signs of this emerged when it became clear that Toshiba had no plans to support Blu-ray, at least not in the near future. In a sense, this is understandable: having waged an increasingly unpleasant and bruising war against Sony for supremacy in the world of high definition, the thought of siding with the format that emerged victorious must be hard to stomach for some members of the Toshiba management team. And a window where it didn't opt for Blu-ray support was logical, if not at least from a PR perspective.

However, if it's not careful it could be perceived that Toshiba is putting ego before business sense. Analysts expect the high definition sector to grow with some momentum in the year or two ahead although it's still debatable if, long term, it will have anywhere near the market penetration of DVD, in the movie space at least and Toshiba would be well primed to snare itself some of the spoils of that.

Still, the firm remains adamant about not supporting Blu-ray, most recently in omitting it from the specs of its latest round of laptops. But it still, it appears, has a few ideas up its sleeves.

The first sign of this was when one or two online discussion groups started speculating that the HD DVD format could be released into the public domain. There was no obvious basis in fact for this, but the ramifications nonetheless were intriguing. After all, this could be quite a spoiler tactic against Blu-ray, and would mean that without the need for manufacturers to pay any kind of licensing fee HD DVD support could easily be added to home entertainment equipment with little added cost.

For several reasons, however, it's not going to happen. Firstly, the idea was more idle chatter than anything even remotely formal. Secondly, the chances of movie studios reversing their decision to support the format are remote at best: the confusion in the marketplace has only just been cleared up, and more is not required. And finally, the complexity of the technology itself means that Toshiba is unlikely to want to give it away, not least because of its crossovers with the DVD format.