In terms of responsiveness, the BB10 keyboard offers one of the best smartphone typing experiences IT Pro has ever encountered.

When typing the same message at speed on a Z10 and a Samsung Google Nexus S device, the autocorrect function on the Z10 consistently picked up far more spelling errors than the Android handset.

One of the reasons for this is the BB10's innovative "flick" feature, which kicks into life as soon as you start typing. As you go, the device will start throwing up suggested words between the horizontal lines on the Qwerty keyboard.

If the word you're typing is there, by using a small upward swipe, you can "flick" the word up into the message you are typing out.

Like many of BB10's gesture-based features, it takes a little while to get used to, but getting the hang of it should (eventually) make responding to emails, tweets, etc, a lot faster.

Users can also, via the settings menu, select up to three languages they regularly type in. The device will then use this information to automatically deduce which one the user is writing in and suggest spelling corrections, for example. 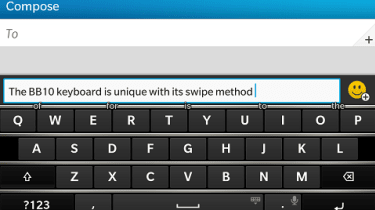