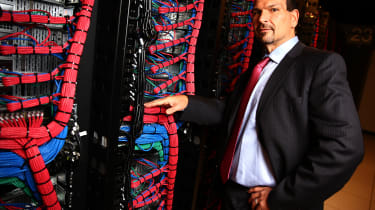 They aren't real public with their numbers. From a technical perspective, when we look at Amazon, we look at the number of locations and nodes installed and the customers that they have.

We see a lot of transitions from their customer base into SoftLayer as those customers become more advanced. Some enterprises start first with Amazon and then find us later because we are more enterprise-driven. From that perspective, we have a sense of how pervasive and competitive Amazon is.

What has changed since you became part of IBM? It has really catapulted the platform into the enterprise at a speed that was unpredictable before. We've added more than 1,000 customers in the first 90 days. It has taken me to a customer base that would have taken quite a long time to achieve.

Before the acquisition, SoftLayer was bringing 100 percent of its business in an inbound and self-service manner. Now, with IBM, we have a high-touch sales team, and that has helped us tremendously. In addition to that, IBM has brought its platform- and software-as-a-service capabilities to SoftLayer. We have more than 50 different SaaS products being ported over.

When I recently talked to Andy Jassy, the head of Amazon, he said that AWS is on track to introduce more than 200 new significant features this year. Not that I want jump back and forth just comparing you and AWS, but I did think that was an interesting metric. What do you think of it? Sure. When we look at the comparison, fundamentally, Amazon does about one-third of what we do. They basically have virtual machines and simple storage. And then all the ancillary things they do on top of those are all just in support of those two core components.

In our world, virtual machines in a public cloud are one-third of our core business. We have private clouds predicated on any technology you prefer to use: VMware, Citrix, Parallels, Hyper-V, and OpenStack. And then we layer literally hundreds of services on top of that. Add on the 110 SaaS companies that IBM owns, and you're talking multiples of add-on services, not only to the infrastructure, but also to pure-play business processes. It's much more advanced than selling individual widgets to developers over the Web.

We'll be adding a lot of international expansion and a little domestic expansion. We believe in getting closer to the customer time zones. You'll see lots of features and functionality added to the SoftLayer platform.

The one unique thing that we have at IBM now is, because we have software and hardware and networking and storage components inside the company, we can begin to change and modify them specifically for use in the cloud, versus the retail hardware boxes that are out there today.

A lot of people have been looking at the basic capabilities of cloud services companies like yours and Amazon, and wondering why the government didn't call you in to help roll out the HealthCare.gov site, which has had so much trouble getting launched. When you see the news coming out of Washington on this front, what do you think? The cloud is absolutely something that the federal government should be using. We made an announcement at a federal conference. We launched federal pods on Ashburn, Va., and Dallas. They will be both FISMA- and FedRAMP-compliant.

And we'll be going directly after business with all those agencies that have those requirements. The ones that don't today, we obviously do business with. But for those that do, we'll have a specific SoftLayer footprint for them to use.

Why would it not occur to a federal agency to call a company like yours in the first place? Was it just bad planning?

There's really no difference between a federal agency and an enterprise client. The cloud is a new technology. It's a different way of doing things. There are still those agencies that have to be shown what the cloud can do.

I've spent a lot of my time during the first 90 days since the acquisition meeting with IBM's enterprise clients showing them what the cloud can do. The whole premise of the cloud is that you turn IT into a variable cost, meaning that you pay for what you use. It's not so much a federal government problem as an IT problem.