Lenovo serves up its first Windows 8 tablet for business, but is the ThinkPad Tablet 2 worthy of such a famous name? 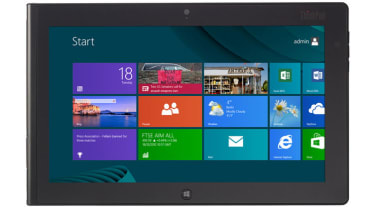 Lenovo is revered for its ThinkPad-branded business machines, so we're surprised it's taken this long for a business tablet to be released. The ThinkPad Tablet 2 ticks the right boxes for corporate use thanks to its stylus support, 10.1in screen and full-fat Windows 8 installation. But it is enough to tempt users away from the iPad or other Windows-based machines?

There's no denying the Tablet 2 looks like a ThinkPad. It's covered with the matte black plastic that's usually found adorning Lenovo's laptops, and the diagonal logo with red-tipped "I" lies in one corner of the Tablet 2's rear panel.

There's no keyboard, and therefore no iconic trackpoint, but Lenovo has managed to replicate its functionality by including a stylus. The Wacom-compatible accessory is topped off with the same bright red dot that's usually found in the middle of the average ThinkPad keyboard. 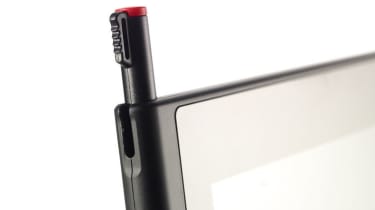 The stylus is stored along the left-hand edge of the Tablet 2, and it's flicked out of its holster by pushing a small grippy pad on the shaft. The stylus worked well in our tests: it's responsive and accurate, and the pressure-sensitive tip allows for varying degrees of depth to graphical work although we didn't quite feel the 1,024 different levels of sensitivity that Lenovo claims. A button on the shaft supports right-clicking.

The ThinkPad's 10mm border is fitted with the usual ports and sockets: a full-sized USB 2 port, a 3.5mm headphone output and a mini-HDMI output, and a proprietary docking connector along the base. There's a slot for a microSD card, but it's not SDXC compatible so can only accept an extra 32GB of memory.

The move to a more mobile form factor has involved compromise the Tablet 2 can't match the best ThinkPad laptops for build quality because of a little give in the rear panel. It's not a big issue, though, and the Tablet 2 is still in the top tier when it comes to strength; this is a device that'll withstand the rigours of the working day.

The 10.1in screen has a resolution of 1,366 x 768 the same resolution as Dell's Latitude 10 tablet. Both are constructed from IPS technology.

We had no trouble seeing Windows 8's Live tiles beneath our bright office lights, but tests reveal that it's not quite as adept as the Dell's panel: the Latitude's screen hit a maximum brightness of 322cd/m2, but the Dell topped out at an impressive 448cd/m2. 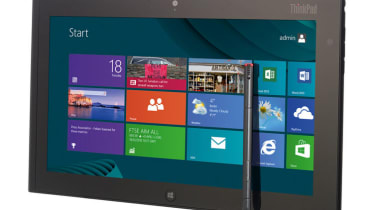 The Lenovo's contrast ratio of 657:1 can't compete with the Dell's measured figure of 734:1, either. While the ThinkPad's screen is perfectly acceptable, the Latitude is the clear leader when it comes to more demanding graphical work.