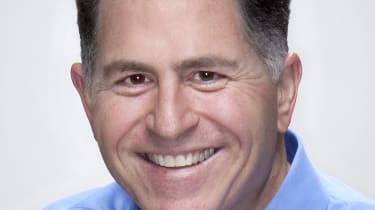 "Finally, some of the power brokers in Dell have accepted that pile them high, sell them cheap' has had its day, and the acquisitions Dell has been making are all aimed at moving it into a much more complex, full hardware stack sell, with the software coming from solid relationships, mainly with Microsoft, but also on the Linux side as well," said Clive Longbottom, founder of analyst firm Quocirca.

"I do believe he has now seen that Dell could not go on as it was. New blood has been brought in, new approaches are being brought to the fore, and Dell is looking stronger than it has done for a while."

On the face of it, Mr Dell has helped create a new company ready for today's IT world. Yet significant stumbling blocks remain. Number one is the declining PC market and Dell's falling position within it.

During its inaugural Dell World conference in Austin last week, Lenovo became the number two PC seller, pushing the US firm down into third place. Given the PC industry is already in decline, the Texan firm will not want to fall from the upper echelons of the market.

Exacerbating things is Dell's performance in other client segments. In tablets, one of the causes of the PC market's contraction, Dell has failed to impress. Its lineup of Streak devices have performed poorly, with the Streak 5 model ditched earlier this year. It has plans for a global release of 10-inch consumer-focused tablets, but they have not emerged in the West yet.

Dell hasn't made much of a mark on the smartphone space either. Despite producing a quality phone with the Dell Venue Pro, its market share remains infinitesimal. According to Gartner, its not even in the top 10.

Michael Dell may have to face up to the reality it shouldn't bet on the consumer segment as much as it currently is. Cisco has proven how disastrous major gambles in the consumer sphere can be, especially if you don't have the relevant acumen or experience.

By turning his ship towards a cloudy horizon and building hardware for the entire stack, Dell is looking like a considerably more attractive proposition.

In tablets, Dell will have to create something with top-level design quality and some significant power, as well as a low-entry price point if it wants to have any chance at succeeding. Whilst it can certainly create quality hardware, offering low costs looks unlikely. For starters, it won't be able to rely on apps and software sales like Amazon can.

Furthermore, no matter how much Dell says smartphones are part of the end-to-end solution for businesses, it can't deny the devices are primarily targeted at consumers. When you think of smartphones though, you do not think of Dell.

Simply looking at the most recent results, which showed much of the positives were coming from the enterprise segment, it should be clear to Michael Dell that placing considerable emphasis on the consumer is a big risk.

Yet Mr Dell has done well. By turning his ship towards a cloudy horizon and building hardware for the entire stack, Dell is looking like a considerably more attractive proposition for companies who want a full business package.

"As long as Dell retains focus and manages to keep fighting with its broadened arsenal of compute, storage, management, network hardware, brought through with professional services and being sold as a solution sell, rather than a portfolio sell, I believe that it will begin to take business away from a wounded HP, and could also chip away at IBM where some organisations see IBM as being too expensive and cumbersome to deal with," Longbottom told IT Pro.

Michael Dell's second reign as CEO won't be of Steve Jobs proportions. He will not turn Dell into a cult-inspiring, behemoth of a tech provider, but there is little doubt he has steered the business in the right direction. All he has to do now is keep firmly on course hopefully steering away from consumer clients - amidst turbulent seas.

As IT spending looks set to diminish over the next year, Dell will have to look to those markets it knows will provide it with solid income.