Philips says the infrared sensor inside its 225B monitor can tell when you're not in front of it and drop the brightness and power. We put it to the test. 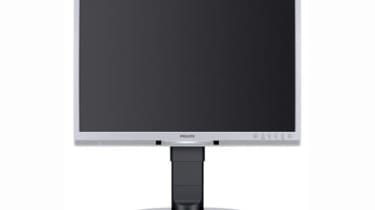 While most monitors can viewed as much of a muchness in terms of features, with the Brilliance 225B Philips cannot be accused of not trying something different.

Taking it out of the box, the 225B admittedly does look much like your average 22in, 1,680 x ,1050 resolution display - silver bezel, buttons at the bottom right, name at the top left.

What's different here is not the slightly tacky blue light underneath the Philips logo but the two black squares placed on the speaker bar at the bottom.

These infra-red sensors are evidence of a feature dubbed by Philips as PowerSensor'. The idea is that the monitor can detect when you're not actually sitting in front of your machine and dim the screen automatically, dropping the power consumption from the default of 40 watts, to 20 watts, in order to save on those energy bills - something no company is going to argue about in the current climate or any other.

This is all fine and dandy as an idea but in practice it is a little tricky to set up. The sensor has five settings Off, 1, 2, 3, and 4, with four being the most powerful, and the range is given as 30cm 120cm. This means that when you're sitting very, very, close to the screen, you'll use setting one, but if further away you'll need use a higher setting.

The default is set to 3, but we found that sitting a perfectly normal distance from the display at our desk, unless we used setting 4, the monitor couldn't detect our presence, and dropped into powersaving mode, with a rather irritating 'PowerSensor Saving Mode ON' message appearing bang in the middle of the screen. This disappears as soon as you move back in front of the screen however.