Olympic tech over the years

Compared to previous Olympic Games, Rio 2016 is heavily focused on creating new experiences for both viewers and athletes. In the past, you needed your eyes glued to the TV or news feed to keep up-to-date with the games. Now, however, online streaming and VR have changed the nature of the game of watching the game.

There's also a focus on green and cloud-based technologies. IT services firm Atos is the official IT partner at the 2016 Olympic games and it has shifted many of its operations to the cloud in a bid to reduce its carbon footprint. At the London Olympics 2012, for example, it used 719 sensors, compared to the 250 it's using in Rio.

Michle Hyron, the company's chief integrator for the Olympic Games, said: "Our team is very well prepared. Atos has even installed an entire backup operations centre, based in an undisclosed location, that has been fully tested and is ready to be used in the unlikely event that it is needed.

"Without Atos, the Olympic Games could not go on for the hundreds of thousands of athletes, employees, volunteers, media and fans in Rio, or for the billions who watch the Games around the globe." 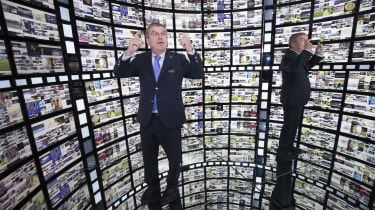 Hyron added: "Atos' IT systems will allow for the instantaneous reporting and beaming of 6,000 hours of Olympic Games coverage to the world through both more traditional television means and digitally to billions of laptops, tablets and smartphones."

Moving with the times

Nowadays, technology is more accurate, sophisticated and reliable and coaches and athletes are showing they can exploit areas like big data analytics and IoT to help them up their game. Electronic targeting is perhaps one of the more common technologies, having been in used since Beijing 2008, but even that has evolved to deliver even more benefits.

The Rio 2016 scoring system now uses laser technology, throwing the previous acoustic system aside. "We can calculate the score with millimetric precision," said Ericson Andreatta, the manager for shooting at Rio 2016.

Sport safety has also been greatly improved. In shooting, radio frequency tags are being attached to to guns to track where they are and make sure they're not misused.

The technology both behind the scene and on show has really come into its own over the years to both meet and exceed the expectations of athletes, spectators and other stakeholders. With innovation gathering pace and new ways of using technology to assist us emerging every day, what will the Olympic tech landscape look like come 2020?