The company expects to launch a bendy smartphone in 2018 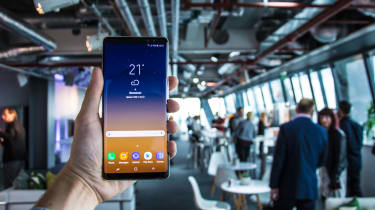 Samsung has officially unveiled the Galaxy Note 8, the follow-up to the popular (although sadly explosive) Galaxy Note 7. Carrying the most cutting-edge hardware and a huge, gorgeous screen, Samsung is hoping the Note 8 will be able to put its predecessor's unfortunate fate behind it.

13/09/2017: Samsung's 2018 range of smartphones may make use of its bendable screen technology, according to one of its execs.

Koh Dong-jin, president of Samsung's mobile business, said its eyes are set on launching a device with a bendy screen as early as 2018, although it seems development of the products have stalled as the company's engineers try and overcome the problems.

"As the head of the business, I can say our current goal is next year. When we can overcome some problems for sure, we will launch the product," he explained, as quoted by the Guardian.

However, he wouldn't give any more insight into the problems the company was experiencing or whether they directly related the screens or creating an entire product with a flexible display.

It's important to note that Samsung has managed to implement bendable screens to use on curved displays for its TVs and a selection of smartphones, but these don't have any kind of bendable aspect -they are designed to stay in the same shape.

Meanwhile, Samsung's main rival - fellow Korean manufacturer LG - has already won patents for its bendable screen technology, meaning it could well be ahead of the current smartphone market leader to launch a device with a foldable screen.

24/08/2017:Analysts have come out in favour of the Galaxy Note 8, saying it underlines Samsung's commitment to the brand despite the Note 7's faulty battery issues.

The company unveiled the successor to the ill-fated smartphone yesterday amid much fanfare, with a number of impressive, high-end features to tempt users to splash out on the device.

"The Note 8 joins the well-received S8 and S8+ arguably giving Samsung the best high-tier Android line-up of any manufacturer," said CCS Insight's chief of research, Ben Wood. "The fact Samsung was prepared to continue using the Note brand shows its belief that there is significant pent up demand for another top-of-the-line flagship device alongside the rest of its smartphone portfolio."

"By launching the Note 8 now, Samsung gets the oxygen of publicity ahead of Apple's highly anticipated iPhone 8. Samsung will be hoping that a trio of competitive high end products will appeal to anyone looking for a new Android phone. Furthermore, these devices are certainly good enough to turn the heads of a few iPhone owners who fancy a trying a different device."

The biggest headline feature is the camera, which features a dual-lens setup for the first time ever on a Samsung device. While dual-lens configurations are now a relatively common sight on high-end smartphones, the Note 8 is one of the only devices to use optical image stabilisation on both lenses.

"The Note 8 demonstrates to rival phones makers what a fearsome competitor Samsung is. It offers a smartphone with a pen-centric twist which will act as a halo device to Samsung's already strong line up," Wood said.

You can read IT Pro's hands-on review of the new Samsung Galaxy Note 8 here.

23/08/2017: The Samsung Galaxy Note 8 is due to be announced later today, but the company has accidentally already leaked a few details of the unlocked device on its own website.

Although the company removed the informaiton almost as quickly as it appeared, a picture of the device popped up, revealing exactly what it will look like.

When blogger Tim Schofield, who was among the first to notice the slip-up, clicked on the picture to find out more details, he was redirected to a 404 error. When he refreshed the page though, he was able to view rear shots of the device too.

However, from the details that did appear alongside the device include that it will be available unlocked direct from Samsung, one version will include 64GB storage, it'll feature an infinity screen, an S pen and the Bixby voice assistant.

Looks like the Note 8 popped up on the official Samsung website... Clicking on the device gives an error. https://t.co/ujQdvJaPkH pic.twitter.com/4hgajQicCZ

Unsurprisingly, Samsung fans threw quite a few replies at Schofield, including some suggesting the company had revealed the pictures on purpose to keep the hype up and others asking about other features that could be present.

There wasn't any evidence of a 256GB Samsung Galaxy Note 8, although we should find out this evening exactly what capacities Samsung's new flagship phablet will come in.

Samsung has always charged an extra premium for its Galaxy Note devices, and the Note 8 is no exception. According to leaked pricing from Carphone Warehouse, the new flagship will retail for a price of 860 inc VAT, which is just over 200 more expensive than the Galaxy S8 was when it launched.

To soften the blow a little, Samsung is throwing in a DeX unit - which retails for around 129 individually - with every Note 8 pre-order. If you were planning on getting DeX anyway, this shaves the price down to a slightly more reasonable 740.

The Note 8 will be available in stores on 15 September, with pre-orders opening soon.

Resembling a larger, squarer version of the Galaxy S8, the Note 8 looks like a very attractive device indeed. It sports Samsung's signature curved-edge display, and features the built-in S Pen stylus that is the trademark of the Note range.

It'll be available in four colours including 'Orchid Grey', 'Deep-sea Blue', 'Midnight Black' and 'Maple Gold', but the UK will only be receiving the black and gold options.