Is this miniturised edition of the popular Android handset worth it for those on budget? 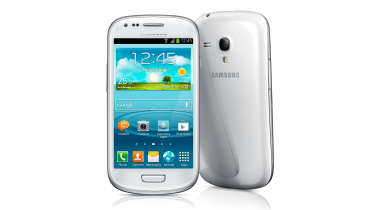 Samsung's Galaxy S3 has dominated the smartphone world, so it's no surprise the Korean firm has tried to capitalise on the success by offering up a cheaper version. We take a look to see if the S3 Mini is worthy to purchase if the flagship S3 or forthcoming S4 devices are out of your price range.

Miniturising the S3 sounds like a great idea on paper: the famous white-and-metal design and similar levels of power crammed into a phone with a more manageable 4in screen.

We're big fans of the S3's design, and the Mini version - size reduction aside - hasn't deviated far from Samsung's blueprint. The white front and rear is complimented by that chrome-effect border, and the curved corners, logo placement and buttons of the original S3 haven't been altered.

Differences are minor: the Mini's top and bottom are a little curvier. Various sensors at the top of the phone have jumped to the other side of the Samsung logo, and the notification light has been lost in translation.

One main button remains at the bottom of the handset, and the rear panel pops off easily - so this phone's battery can be replaced, and its SIM and microSD slots easily accessed.

Weighing in at 111g the Mini undercuts its bigger brother (133g), but the smaller handset feels just as sturdy. That's likely down to the increased girth, with the S3's 8.6mm frame expanding to 9.9mm here. We've no problem with the increased thickness - it helps make the S3 Mini an extremely comfortable phone in the hand.

Peek under the hood and it's clear that the S3 Mini just can't match the original phone when it comes to power. The Mini is powered by a dual-core ARM Cortex A9 chip running at 1GHz - a long way behind the quad-core, 1.4GHz Exynos processor included in the full-size device.

The lack of horsepower has an understandable effect on benchmarks. The Mini rattled through the Geekbench test to a score of 758, but the original S3 outpaced it to score 1,387. It's no better in SunSpider, either: the S3 Mini was pedestrian when it came to loading webpages with a time of 1,888ms. This couldn't hold a candle to the snappy 1,280ms offered up by the full-sized S3.

Samsung's version of Android 4.1.1 comes pre-loaded with TouchWiz layered on top, is fluid enough to use on a day-to-day basis, but the lack of power is evident in other areas. Loading times when opening apps were noticeable, with the camera and Google Play Store in particular proving sluggish to start. There was also an occasional pause between pressing the Home button and the familiar TouchWiz homescreen hovering into view.

Samsung has brought most of TouchWiz's options across from the S3. S Voice is here, pop-up video multi-tasking works well, and lock screen apps can still be used. Plugging in a pair of headphones brings up several audio-specific options in the notification bar, and we're pleased that Samsung has ported its host of notification bar options across to this device. They're handy for toggling Wi-Fi, GPS, screen rotation and more, but one option is missing - automatic brightness. That's because there's no light sensor on this phone, and it's an irritating omission even for a mid-range device.

The battery has been cut down to size, too, but we were still pleased by the 1,500mAh power pack's performance. Our 24hr run-down test encompasses screen usage, file downloads, audio playback and making calls, and the S3 Mini had 70 per cent of its power pack left after a full day. That's an excellent result - 10 per cent better than the Galaxy S3 managed.

It's a mixed bag so far, but we're pleased to report that Samsung has brought some of its camera expertise to the Mini's 5-megapixel shooter. Colours are accurate, there's little noise to be found amid its sharp detail, and close-up shots are decent, too.