Need a fully fledged workstation but don’t have much in the way of space? Workstation Specialists thinks it has the answer. 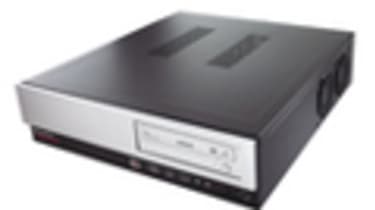 Think workstation and the first thing that comes to mind is an ugly, bulky desktop tower, a huge high resolution monitor and an expensive, specialist graphics card. What you don't expect is a low-profile desktop box that costs around 1,000, but that's exactly what UK firm Workstation Specialists offer, in the form of its compact WS102LE.

The chassis measures a mere 390 x 410 x 100mm (WxDxH) - perfect for environments where you need a lot of power but don't have an awful lot of space to spare. How has this been achieved? The secret is in the choice of graphics subsystem. Rather than specify a pricey, space-hogging, standalone Quadro card, the system's Asus P5N-VM WS motherboard boasts Nvidia's integrated entry-level Quadro FX 470 chipset onboard.

While commonplace in consumer systems, it's the first time we've seen a professional workstation-grade graphics processor built in like this, and it reaps impressive performance rewards. With the help of a 3.16GHz Intel Core 2 Duo E8500 and 8GB of RAM, the WS102LE achieved an overall score of 1.87 in our professional application-based benchmarks.

Of course it helps that the operating system of choice is Windows XP 64-bit rather than Vista, but it's still impressive - a score, in fact, that wouldn't look out of place posted next to an Intel Core i7-based machine.

We also ran a workstation-specific benchmark, SPECViewperf 10, which uses a number of high-end CAD/CAM and 3D design packages to test pure professional graphics performance, and this revealed the real advantage of the FX 470 chip. Adding all the various results together, the WS102LE achieved an overall benchmark score of 205.13, only four per cent behind an overclocked 3.8GHz Intel Core i7-equipped system with a consumer ATI Radeon HD 4850 card installed.