With 65 million tonnes of wasted devices expected this year, it's time for tech to go green 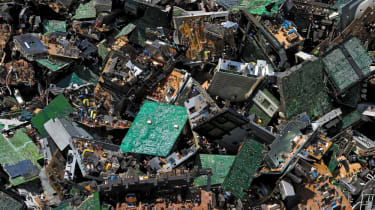 The issue of plastic waste has never been as prominent in the public consciousness. Warnings made by Sir David Attenborough in the final episode of Blue Planet II have been followed by commitments from the UK government and the European Union (EU) and the subject has been raised at the World Economic Forum in Davos.

According to the UN-affiliated StEP programme, the amount of e-waste worldwide is increasing at an annual rate of 5-10%, and the volume is projected to reach 65 million tonnes a year.

Meanwhile, 25.8 million tonnes of plastic waste is generated in Europe each year across all sectors of which just 30% is collected for recycling. Some of this leaves the EU's oversight and much of it ends up in the ocean, as Blue Planet II can testify.

Legally binding pledges are still absent, but Prime Minister Theresa May has promised to eradicate all avoidable plastic waste in the UK by 2042, while the European Union (EU) hopes to make all packaging reusable by 2030.

How great is tech's role?

Clearly, these measures are more geared towards consumables like coffee cups, but this doesn't mean the technology sector can ignore the discussion.

This is a view expressed by Greenpeace, whose annual Guide to Greener Electronics analyses the world's biggest tech firms and gives them letter grades based on their attitudes towards renewable energy, sustainable manufacturing, and other practices, such as the ease at which equipment can be repaired or recycled.

In recent years, the report has placed greater significance on reusable materials that minimise the need to mine for more commodities, consume more energy and create more waste. Indeed, it wants action to back up the progressive, environmentally-conscious image that many tech firms project.

"Now is the time for the tech sector to channel its expertise into reinventing the way that electronic devices are made and used in society, creating a circular and renewably powered business model that other sectors can follow," says Greenpeace.

Among its chief concerns is that vendors are deliberately shortening the lifespan of their products by making them difficult to repair or modify in a bid to encourage consumers to upgrade more frequently. This, of course, increases the frequency at which they're discarded, and therefore the likelihood that this will be done irresponsibility. And this is before we consider the additional resources being used in the manufacturing and delivery processes.

"The amount of e-waste generated globally continues to see significant growth, already 50-60 million metric tons each year and still rising due in great part to the shorter replacement cycles in IT equipment," Gary Cook, IT Campaigner for Greenpeace, tells IT Pro.

"Too many devices, smartphones in particular, are designed that make even battery replacement, screen replacement, and upgrading of storage increasingly difficult if not impossible."

Greenpeace estimates that just 16% of e-waste is recycled responsibly and that although some progress has been made with plastic, the same can't be said of metals. By closing the loop' on both plastic and metals, manufacturers will be able to recycle more from old products and reduce the amount of waste.

A number of companies have committed closing the loop with plastic, most notably Dell, but several have not fulfilled pledges to eliminate PVC and BFRs (Brominated Flame Retardants) from their products. Only Apple and Google have done so to date.

"The average computer requires an astonishing 22kg of synthetic chemical compounds during production, but that's not nearly the end," Christina Valimaki, head of research and segment markets at analyst firm Elsevier, tells IT Pro.

Many of the components in tech products are toxic, such as the lead and cadmium in most modern monitors and mercury in screen-lighting lamps, parts that aren't always disposed of properly.

"Tech firms must break the product lifecycle down into distinct stages to identify where toxic materials are used and where plastic waste is produced, and either change the manufacturing processes or substitute with greener' materials," adds Valimaki.

Regulation, of course, plays a role. A revised EU Waste Electrical & Electronic Equipment directive, set to come into effect in 2019, will require member states to recycle or collect 65% of all equipment sold or 85% of all wasted electronics.

But activists want an entire mindset change within the IT industry - the creation of products that are easier to repair and upgrade. Apple, in particular, has been criticised for making it a challenge to replace screens or batteries that are damaged or ageing.

"There are certainly opportunities to reduce the amount of waste generated in the manufacturing of the products and components, as well as in the amount of packaging, and we have begun to see some leadership on both of these fronts by some companies," adds Cook.

Following the recall of the Galaxy Note 7 last year, Samsung revealed it would collect 157 metric tons of metals and refurbish some models. Dell has also been noted for its attempts to use recyclable packaging, using materials such as bamboo and wheat straw for its products, and wants to use 100% biodegradable or recycled materials by 2020.

And in 2013, mobile operator O2 started to ditch the wall charger from some smartphones, only providing a Micro-USB cable, as there are already hundreds of millions of unused chargers in the UK from previous devices.

Environmentally conscious organisations should only be selecting those suppliers that are committed to reducing waste and choose products that are easy to repair.

Greenpeace's rating system only applies to the 17 largest electronics manufacturers in the world, but it's a useful starting point, and for individual products there are certification programmes. Most notably there's the Green Electronics Council's gold, silver and bronze EPEAT certifications that are awarded for meeting certain standards on design, toxic materials, lifespan and packaging.

"Corporate IT departments have an important role in reducing IT waste," says Cook, "by selecting those brands and products who demonstrate both solid product design and a commitment to providing product repair information."

Organisations have a responsibility to ensure they have an adequate recycling policy in place, which includes using suppliers that will take back older products.

"Aside from mobile devices, businesses also amass a huge amount of other unused IT equipment such as PCs, laptops, servers, networking equipment, etc. It is vital these are disposed of properly from an environmental and data perspective," Keir McConomy, founder and CEO of phone repair firm iMend, tells IT Pro. "Businesses can even earn money for their old stock."

The technology industry has long positioned itself as a progressive, liberal force with greater morals than other sectors. And this can be seen in the advent of green tech' firms looking to solve environmental problems such as pollution and waste.

But as awareness of plastic and e-waste continues, and as tech infiltrates our lives in more areas, manufacturers and must be prepared to take even greater responsibility for the effect their devices have on the environment.