A range of IT projects, from digitising the border force to an NHS e-referral service, may never be delivered 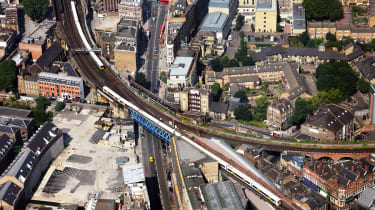 A range of government IT infrastructure projects are at risk of failing, according to the UK infrastructure watchdog, with the number of projects declared 'undeliverable' on the rise.

Of the more than 130 large-scale government projects the Infrastructure and Projects Authority (IPA) assessed in its latest annual report, 46 across all categories have been declared amber/red or red, meaning they are either undeliverable or at risk of failing, rising from 38 the previous.

Based on assessments made in September 2017, the IPA examined the viability of 133 government initiatives - including 41 transformation and service delivery projects, 31 in infrastructure and construction, 32 in military capability, and 29 in ICT - at a collective whole life cost of 423 billion.

Although ICT is the smallest category, with a whole life cost of 10 billion, these projects include significant undertakings including the Department for Health and Social Care's (DHSC) NHSmail2 programme that is geared to implementing a secure mail service across the health sector.

"This category of projects is very important for achieving cost savings and efficiency, and government will continue to apply innovation and technology to achieve its goals," the report said.

"Many of the ICT projects on the portfolio enable the transition from old, legacy contracts to new ICT provisions. Often through entering smaller, more manageable contracts with integration services delivered in-house, projects have enabled departments to become more flexible and efficient."

HMRC's Columbus programme is another project that illustrates the breed of ICT project the government is undertaking, with the project aiming to oversee a safe transition from a former contract to a new IT operating and sourcing model.

The overall performance of ICT projects has risen slightly against the previous year, with seven amber/red projects against nine in 2016/17, but the number of ICT initiatives being taken up overall has declined by ten from 39 to 29 - and the number of projects ranked green has remained the same.

The Home Office's Emergency Services Mobile Communications Programme (ESMCP) is among the most at-risk projects assessed, as are plans to deliver digitally-transform the UK Border Force.

Meanwhile, the report has highlighted the role of Brexit in the government's plans to deliver infrastructure projects, calling for a need to raise the level of investment and delivery skills in government in order to achieve the "high priority" initiatives.

"The collective size and scope of these projects is impressive. It takes years of hard work from the cadre of world class project delivery professionals in government to deliver projects of this scale and complexity," said Tony Meggs, IPA's chief executive.

"The current portfolio of government major projects remains a broad and ambitious one. It is vital that we continue to help create the right environment for their successful delivery."

Despite a gloomy forecast the government has taken pride in the successful delivery of 26 projects completed this year, including the completion of the Francis Crick institute, the biggest biomedical research facility under a single roof in Europe, and the DWP's Hosting Services Refresh programme, refreshing the department's IT system.

"We are focused on building a Britain that is fit for the future and this report shows just how much we have achieved. All of these projects will improve the way we deliver public services in this country," added cabinet office minister for implementation, Oliver Dowden MP.

"Project delivery is at the heart of all government activity as it is the main way we implement our most important policy priorities. Getting these projects right is essential to build a country that works for everyone."

Several major government-driven IT infrastructure projects have come under heavy scrutiny in recent months, including the DWP's implementation of Universal Credit, which was savaged in a report by the National Audit Office (NAO).

In a lengthy report critiquing the department's approach to rolling out Universal Credit, the NAO highlighted the department's failure to manage the rollout of its new digital system, dubbed full service, and the lack of sensitivity it showed towards claimants facing hardship.