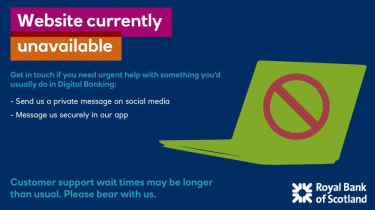 NatWest, RBS and Ulster Bank have all suffered from major website outages that have prompted a deluge of complaints from customers locked out from their online banking services.

The problems were first reported at around 9am on Tuesday morning, with systems still offline at the time of writing (15:00 BST).

"Our website is still unavailable and we're working hard to fix it," a NatWest Twitter post reads, which has been reposted three times over the course of five hours.

⚠️ Our website is still unavailable and we're working hard to fix it.You can use Online Banking or our mobile app. Sorry if this is causing you problems - we'll update you when we have more information. pic.twitter.com/N9OHbYlBpB

The three banks, all of which are owned by the Royal Bank of Scotland Group, have advised customers they are able to turn to mobile apps to access their accounts, however, some customers have complained of poor performance and unresponsive services.

One NatWest customer said: "It's like the money is disappearing".

Hurry up ... got payroll to process 😡

I don't want to have to use your mobile app! Any update on when things may be sorted?

Thousands of bug reports have been submitted by users since the early hours, according to outage monitoring site Downdetector.

An RBS spokesperson told the BBC: "We are aware that customers are currently experiencing issues accessing our websites and online banking login pages. We apologise for the inconvenience caused."

NatWest alone is said to serve more than 7.5 million current accounts, as well as more than 850,000 small business accounts. When combined with RBS, the total number of potentially affected accounts could be well over 25 million.

It's still unclear what has caused the issue, but the problem appears to be the same across all three banks. There is currently no timeframe on a potential fix.

NatWest and RBS suffered a similar IT glitch in 2014 when mobile banking services were knocked offline for almost a full day.