Crimes occurred in the month following the introduction of harsher penalties 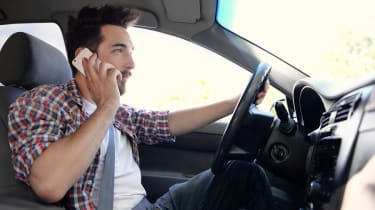 Nearly 6,000 drivers were caught for using their mobile phones while driving in the month since the government increased penalties for the offence.

The figures equate to 200 drivers per day from 1 March, when the Department for Transport (DfT) doubled the penalties to a 200 fine and six penalty points, until 28 March.

The Press Association used a Freedom of Information request to obtain the statistics, which show police punished 5,977 incidents in the month following the tougher laws coming into force. At 2,037 incidents, London drivers were the worst, committing around 70 infractions per day.

Some suggested these figures show the tougher laws aren't curbing this behaviour.

Road safety charity Brake told the BBC: "Driver distraction is a growing menace and it's worrying that drivers don't seem to be getting the message."

Steve Gooding, director of motoring research charity The RAC Foundation, added: "Driving is a safety-critical activity that requires our full attention. Hands need to be on the wheel and eyes looking out of the windscreen, not down at the phone screen."

The National Police Chiefs' Council lead for roads policing, Anthony Bangham, told the Guardian: "Drivers need to understand that this is not a minor offence and you will be prosecuted under new, tougher penalties."

Those caught using their phone while driving within two years of getting their driving license could lose their license entirely, and any driver stopped twice faces being disqualified.

Motorists caught using their mobile phones while driving will receive six points on their licence and a 200 fine, under new rules that come into force today.

The laws drawn up by the Department for Transport (DfT) double the previous punishment of three points and a 100 fine after a consultation on introducing more severe penalties last year, which the DfT said received "almost unanimous support".

Any drivers stopped for using their mobile phone at the wheel twice will be brought before a Magistrates' court, where they face being disqualified from driving and fines of up to 1,000.

Additionally, new drivers who have held their licences for under two years can have their licences revoked after being caught once. Lorry and bus drivers could be suspended, the DfT added.

Calling the offence "as inexcusable as drink-driving", transport secretary Chris Grayling said: "Doubling penalties will act as a strong deterrent to motorists tempted to pick up their phone while driving and will also mean repeat offenders could find themselves banned from our roads if they are caught twice.

"Our message is simple and clear: do not get distracted by your mobile phone while driving. It may seem innocent, but holding and using your phone at the wheel risks serious injury and even death to yourself and other road users."

Extra police traffic patrols across UK over the next seven days will mark the law coming into force, after 3,600 drivers were caught in a week of enforcement in January. An advertising campaign outlining the dangers of driving while using your mobile phone will target billboards, TV, and cinemas too.

Chief Constable Suzette Davenport, National Police Chiefs' Council roads policing lead, said: "These new penalties reflect the seriousness of the offence and will strengthen the deterrent against using a mobile phone at the wheel. We need people to understand that this is not a minor offence that they can get away with."

The Ministry of Justice has recently completed a consultation on increasing the maximum sentence for causing death by dangerous driving from 14 years to life imprisonment.