Why London is wrong to roadblock Uber 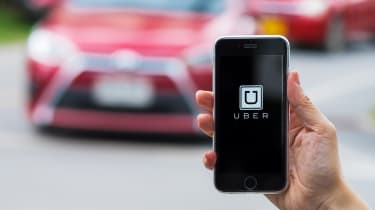 The ride-sharing king is dead; long live London's black cab. Transport for London's (TfL) decision to not renew Uber's licence to operate in the city spells the end of smartphone ride-hailing after a boozy night for Londoners.

As someone who has seen Uber as a metaphorical life-saver after getting trapped at the far reaches of the London's Central line after a slightly over-exuberant evening, I'm not particularly happy at TfL's decision.

In fact, I feel it marks a significant step backwards in the evolution of London's transport and the technology behind it.

While I came late to Uber compared to others, I soon realised that it not only offers a cheaper alternative to London's iconic black cabs, but it makes clever use of the technology we all carry around in our pockets.

Unlike attempting to catch a taxi after the Tube is shut, forced to queue with intoxicated people hell-bent on singing 'Hey Jude' while barging their way to the nearest taxi, I can simply hail a ride from a user-friendly app that shows me near enough exactly where my metal chariot awaits and how much it will cost to get me home.

And once I'm in my Uber ride, I can track the progress to my final destination, and through the use of Spotify integration allow the driver to sample 'Roland's Wake Up' playlist.

To my mind, Uber represented the foundations for London to become a proper smart city, by presenting an amalgamation of technology that many have promised will streamline our lives but have often failed to deliver. And now TfL has killed it for me and some 3.5 million fellow users.

Of course, if I remove my rose-tinted glasses, Uber has definitely been a company awash with questionable practices, from how it treats its drivers to divorcing itself from being responsible for its users and attempting to hide from regulatory probes.

The proliferation of Uber drivers in London has also had a negative effect on traditional taxi drivers, who have bemoaned that the ride-sharing service undermines their extensive training and knowledge.

Then we have Travis Kalanick, a now ousted chief executive who appeared to oversee a culture of sexism and bullying. In many ways, TfL's branding of Uber being unfit for purpose and having a "a lack of corporate responsibility" is pretty accurate.

Yet despite these flaws Uber has used technology in a forward-thinking fashion; whether deliberately or not, it has essentially democratised transport for nearly everybody in London in the same fashion as the Underground once did.

With Uber, you simply put your destination into the app and a nearby driver comes to pick you up, there's no "I'm not going south of the river" black cab driver quips to deal with.

People from ethnic minorities have pointed out that they are guaranteed to get a ride in Uber, as opposed to normal taxi services, which some have claimed are more hostile to minorities and not as likely to accept their fares.

Other people have commented that the lack of policing on other public transport has seen them use Uber to feel safe when travelling around London.

And then there's the work opportunities Uber's digital gig-economy service has facilitated. Some 40,000 licensed drivers rely on Uber to make a living, and while the company isn't exactly fair in the way it supports its drivers, it still presents a means to make money in a world where getting and keeping work is increasingly a challenge.

TfL is correct in saying that Uber needs to get its house in order, having basked in the glow of a laissez-fair approach to regulation over the past five years or so. But I think it's a little rich for a public sector authority to take that view when the government itself still allows the existence of zero-hour contracts and other questionable practices among major companies.

If Uber can't appeal the decision then TfL will have made it tough for a whole range of people and could ruin the livelihood of Uber drivers, though it will make things easier for black cab drivers.

But what resonates with me from a tech perspective is how TfL's decision effectively reverses innovation in London's transport, potentially blocking a service that encouraged healthy competition and arguably had an overall benefit for Londoners.

I believe TfL could have done more at the early stages of Uber's introduction in the capital to ensure it played by the rules, and it still could work closely with Uber to bring the ride-hailing service into the fold without curtailing the transport evolution and competition it offers.

There are still Uber-esque companies out there like mytaxi (formerly Hailo), but to my mind, TfL's decision is close to proclaiming that London's transport is closed to tech innovation, leaving the capital's residents to put up with packed Tubes, busy buses, and air-polluting diesel taxis.

If Uber really does leave London, I feel the capital's potential to be a forward-thinking smart city follows it on the road out.