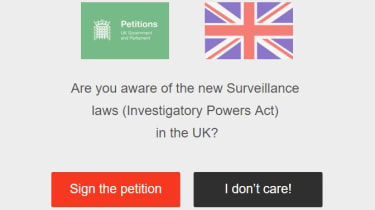 The pop-up message comes a little late, however. The Investigatory Powers Bill has already been signed into law, gaining Royal Assent on 29 November, and the petition itself long ago topped the 100,000 mark that triggers a response from the government.

That response was a refusal for another debate on the issue, pointing out that "the Investigatory Powers Bill was debated on many occasions in Parliament before it became law".

A more detailed response claims that the Snooper's Charter was "subject to unprecedented scrutiny" and brings in necessary powers for security services, and includes privacy protections - a fact digital rights campaigners dispute.

"The IP Bill was debated and passed while the public, media and politicians were preoccupied by Brexit," Open Rights Group executive director Jim Killock told IT Prowhen the 100,000 signature mark was passed last month.

If you still want to sign the epetition - without visiting the adult site - you can do so here.

While xHamster's political posturing may be misspent in this instance, there's another target it can aim for: the Digital Economy Bill and its requirement that pornographic sites run age verification checks or risk being blocked across UK networks. That will mean adult sites know the real identity of those visiting it, a honey pot which may well attract hackers looking for blackmail material similar to the Ashley Madison affair.

Following the second reading, there will be a report and consideration of amendments, before it's signed into law via Royal Assent, expected to happen early next year.

A petition against age verification on the government website has just 22 signatures so far, though the anti-porn rules have already sparked protests.