EU ponders the impact of working robots on social benefits, liability and more 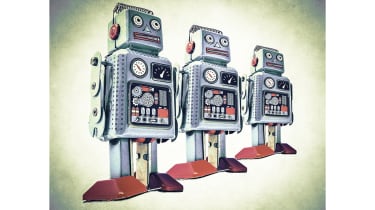 European Union legislators are considering such questions as they examine what the rise in robots replacing humans at work will mean for social security, insurance and more.

A draft report of recommendations for the European Parliament was filed last month, suggesting ideas to address looming problems raised by robots taking over human jobs.

One issue raised is the effect on social security: with fewer human employees, companies will pay less into government benefit systems. That raises concerns about "the viability of social security systems if the current basis of taxation is maintained, creating the potential for increased inequality in the distribution of wealth and influence", the proposal noted.

The report suggested companies should be required to disclose how many "smart robots" they use and the savings that means in social security contributions, which could have tax implications. It also called for member states to consider a universal basic income, which citizens of Switzerland recently voted against trialling in a recent referendum (via BBC).

Another issue is liability, specifically who is responsible for a robot's actions if it hurts anyone or causes damage. That could depend, the report suggests, on the type of robot and how autonomous it is, but companies should have insurance to cover any damage and engineers should specifically design them to avoid harm to humans.

The report also considers the ownership of intellectual property for robot creations, suggests they be registered for tracebility, and calls for developers to offer access to source code in order to investigate any accidents they cause.

Overall, the idea is to create a "specific legal status for robots, so that at least the most sophisticated autonomous robots could be established as having the status of electronic persons with specific rights and obligations, including that of making good any damage they may cause, and applying electronic personality to cases where robots make smart autonomous decisions or otherwise interact with third parties independently".

The idea of drawing up legislation around robotic workers is not being welcomed by everyone in the robotics industry, however. Patrick Schwarzkopf, managing director of the VDMA's robotic and automation department, said a legal framework for electronic persons is "something that could happen in 50 years but not in ten years".

"We think it would be very bureaucratic and would stunt the development of robotics," he told reporters at a robotics trade fair in Munich, according to Reuters.

Even if the motion passes, which is not seen as likely, it would only be a non-binding resolution. However, it comes amid rising concerns that robots could usurp humans in millions of job roles - though some dismiss such claims as "fanciful" - and as experts consider what human rights robots should have.