The Latitude 3330 is aimed at small businesses and schools. Is the Windows 7 machine a perfect classroom companion or obsolete? 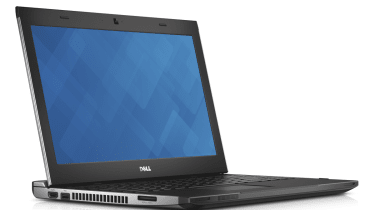 Dell hasn't deployed one of Intel's new Haswell processors for this machine instead, it's used the Ivy Bridge-based Core i5-3337U. It's a mid-range low-power part with two cores, and Hyper-Threading and Turbo Boost are both included so the two cores address four concurrent tasks, and the 1.8GHz stock speed can hit a maximum of 2.7GHz.

Four gigabytes of RAM is at the low end of what we're seeing in laptops now, and the two parts combined for an overall application benchmark score of 0.66. The Dell is better when navigating Windows and applications, as its responsiveness score of 0.8 demonstrates, but its weaknesses are highlighted by a poorer multitasking result of 0.5. It's the sort of pace we've seen in other laptops at this price, and it's enough to handle basic work applications but not much more.

The lack of pure power does mean battery life is reasonable, but connectivity is poor.

Graphical capabilities minimal too: the Latitude ran through our 1,366 x 768 Low-quality Crysis test at 35fps.

The 500GB hard disk is described by Dell as "hybrid" drive that boosts speeds with flash memory, but we didn't see much evidence of this in the AS SSD benchmark. The drive's sequential read and write speeds of 79MB/sec and 109MB/sec are the results we'd expect from standard platter-based storage.

The lack of pure power does mean battery life is reasonable. An eight-hour light use benchmark result is a couple of hours behind most Ultrabooks, and it means that the Latitude should make it through a day away from the mains.

Connectivity is poor. There's Gigabit Ethernet, but the 802.11n Wi-Fi is single-band, and there's no sign of Bluetooth, TPM or NFC components that we're used to seeing in most laptops these days. Dell does promise mobile broadband, but it hasn't released details about these options.

Dell usually lists its laptops with a huge range of configuration options, but that's not the case with the Latitude 3330 it comes in just two models with specifications that can't be changed.

The model we've reviewed here costs 573 ex VAT, and it's the pricier of the two machines. The cheaper Latitude costs 434 ex VAT and its specification is reduced in several departments. The Core i3-2375M processor is based on the older Sandy Bridge architecture rather than the Ivy Bridge underpinnings of the Core i5 used in our review sample, and its speed of 1.5GHz isn't anything to boast about especially without Turbo Boost. The cheaper model's graphics capabilities won't be as good, either while the more expensive machine has HD Graphics 4000, the cheaper laptop has HD Graphics 3000.

Storage takes a hit, too, with the 500GB hybrid drive replaced by a standard 320GB hard disk. Warranty options are the same across both models: upgrading the standard one-year next-business-day deal to a three-year package costs an extra 25, and adding ProSupport to the one- and three-year deals respectively will put 24 and 95 onto the price.

Dell intends the Latitude 3330 to be used in education as well as small business, and it's got one accessory that's pertinent to the classroom. Its Mobile Computing Cart can be used to store and charge up to 30 laptops or tablets at once, it's got wheels, and it's got a lock, on-board Ethernet and a heat management system. It's not cheap: an unmanaged version costs 1,643, and a managed Cart will set you back 3,000.

The Latitude 3330 is decent in most departments: it's light, battery life is good, and it's got enough power to handle the applications that small businesses and schools use. Build quality and looks are both only average, though, and the screen won't win any quality awards either. There's plenty of competition in this mid-range market, and the Dell isn't good enough to lift itself above rivals.

Dell intends its Latitude 3330 for small business and education, and its reasonable performance and battery life are good enough for these markets. The screen, build quality and design are all average, though, and the Latitude isn’t any cheaper than rivals.