With a Carbon Fibre chassis, numerous ports and a docking connector, is this the best business Ultrabook to date? 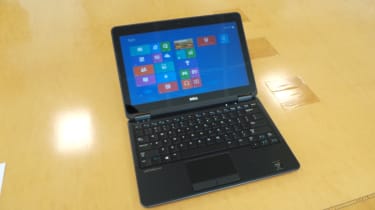 Dell has refreshed its Latitude range, but it's the 7000 Series Ultrabooks that are the most tantalising business class machines on offer.

The Latitude 7000 range aims to take all the best bits from a regular laptop and condense them into an Ultrabook form factor. Early hands-on suggests Dell might have finally nailed the balance between making a powerful, portable Ultrabook without having to strip out all the connectivity business users rely on. We took the Latitude 7240 for a quick test run to see what it has to offer.

Connectivity and build quality are the two standout features of the 7000 range. You'll struggle to find any other Ultrabooks that are as portable as the Dell 7240 and retain the myriad of connectivity options.

Along the back edge of the Ultrabook are 2 x USB 3.0 ports, an HDMI output and a desirable RJ-45 jack. Another USB port is placed on the side together with an SD card reader and mini Displayport. Although the inclusion of these makes the Dell 7000 slightly thicker than its competitors, it's still 20mm at its thinnest point and most users will be thankful for the extra ports. Anyone who's ever used an Ultrabook such as the Lenovo X1 Carbon, which has sacrificed connectivity in favour of a thin chassis, will appreciate the lengths Dell has gone to in this area. 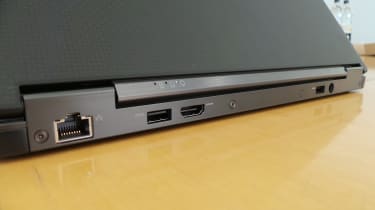 Build quality is uniquely correlated to the inclusion of the touch screen. Perhaps in an attempt to encourage users to opt for the touch screen panel, users will be rewarded with not only a sturdy and attractive Carbon fibre chassis but also Gorilla Glass protection.

For an extra 80, this appears good value. Not only does this give the 7000 series look beautiful but helps to reduce the overall weight of the device. The 12in model registers 1.36kg on the scale and the larger 14in version is 1.63kg. 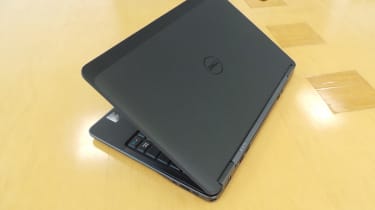 There are a number of configuration options when it comes to the display users can choose between screen sizes and also the resolution depending on the budget. The device we looked at featured a 12.5in (1920 x 1080) full HD touch screen display. The screen is a couple of inches bigger than other Windows-based devices such as the Microsoft Surface Pro but it's still good for word processing and web browsing once you've adjusted the display to increase the font size.

Dell does offer a 14in model if you need extra real estate space on the move. Most users should find this comfortable enough to use when out and about, but you may still struggle if you need to carry out photo or video editing-type activities.

In an office environment, the small screen is mitigated by the inclusion of the docking port on the base of the device. This is compatible with Dell's existing E-Series range of monitors and is a massive boost for users who want to use this as their primary machine when at the office.

As with all Dell machines the components are configurable depending on user requirements. Dell offers the choice between Intel's latest Core i (Haswell) processors, varying amounts of RAM, a choice between Windows 7/8 or Linux Ubuntu and either a 256 GB SSD or Hybrid drive. These specifications should be more than enough for the majority of users.

Dell has taken a step away from the Chiclet-style keyboard opting instead for the more traditional style. In our brief play on the keyboard, the letters appeared reasonably springy, but more testing is needed to see if it's as comfortable a typing experience as Lenovo provides, especially given the cut-down chassis. 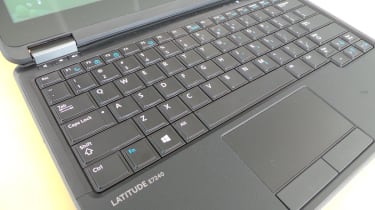 The 7000 series supports vPro chipsets out-of-the-box allowing IT admins to manage devices - an attractive feature for those considering a widescale deployment.

Dell also touts its 3-factor security on the device, which it claims makes it the "most secure Ultrabook" on the market. The 7000 series is preloaded with Dell Data Protection (DDP) software aimed specifically at countering malware. The Ultrabook is also certified to the highest level of disk encryption Level 3 on the FIPS 140 -2 standard. This protects the device from physical tampering. Finally, Dell also provides options when it comes to authentication - giving users the choice to use smartcard and fingerprint readers.

Dell is quoting a battery life of 8.6 hours based on normal usage and if the 7000 series can get anywhere near this figure it will satisfy the needs of the majority of users. It's always possible to opt for a larger 4-cell battery pack, should you want more juice on the move.

The 7000 Series starts at 789 for a non-touch model. The touch functionality pushes the price up to 869. Overall price will vary depending on the configuration of the other parts.

Dell will make the touch version of the 7000 series available on the 12 September.