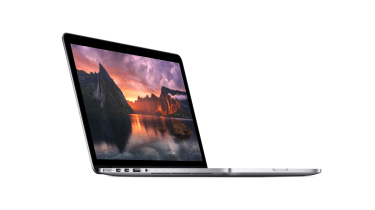 The late-2013 refresh introduces Intel's 4th generation (Haswell) chipset and 4-channel PCIe-based flash storage on the hardware side. The 15in MacBook also ships with Mavericks OS X and a host of bundled apps including iWork, Maps and iBooks. Our entry-level unit featured Intel's Core i7 (2GHz) processor, 8GB RAM and 256GB SSD, priced at 1699.

Pleased to see you

High-res photos and videos get the best out of the panel, but not all websites and programs are optimised to take advantage of the Retina Display just yet. You may need to access the display settings and scale the resolution depending on the apps you use. 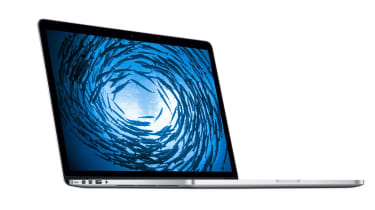 We measured a maximum brightness of 350cd/m2, which means you can use this at 75 per cent in home and office environments. The glossy panel does catch the reflections from overhead lighting, but this is common with most laptops and remedied by adjusting the panel.

The 15in MacBook weighs in at a portly 2kg, but considering the size of the display, power and all-day battery life, this is a reasonable trade-off. Little has changed when it comes to the design, with Apple shaving off a couple of millimetres from the beautifully crafted Aluminum design.

The metallic chassis is tough with no flex in the shell and a sturdy hinge connects the display to the body. There also two stereo speakers located either side of the keyboard, great for when you want to watch a movie or listen to music at home. 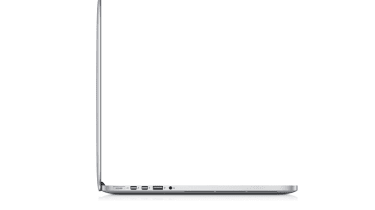 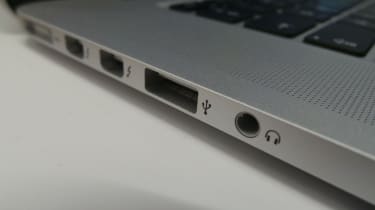 Apple's familiar chiclet-styled keyboard is identical to the previous generation. Whilst the keys on the MacBook Pro are well spaced and have a good amount of travel, they don't have as much bounce as Lenovo's ThinkPad keyboard, which is still the input to beat. 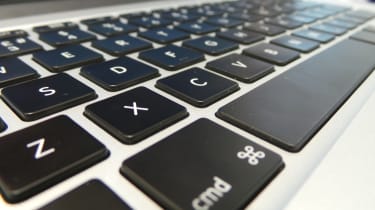 The metallic design means the sharp edges on the MacBook can dig into your wrist, so you may need to adjust your typing position when using the device for long periods. We also found the 'enter' key a tad on the small side, but this was a minor issue.

When it comes to trackpads, Apple leads the market. The two and three finger gestures are consistent and responsive and make up for the lack of touch screen. Users migrating from Windows will also be pleased to know that to activate a right-click on the Mac you simply push down on the trackpad with two-fingers.

MacBooks have the edge over Windows devices when it comes to battery life despite both using Intel's latest Haswell chipset range. The difference lies in the software, with OS X Mavericks draining less power than its Windows counterpart.

Apple touts eight hours of Wi-Fi usage or video playback from the 15in MacBook Pro at 75 per cent brightness. And it's one of the few devices on the market able can hit these targets.

As part of our revamped battery test for laptops, we carried out three tests with brightness set to 75 per cent and backlighting turned off.

In our 'Iron Man' challenge, we switched Wi-Fi off and looped an HD copy of the Marvel film until the device ran out of battery. The Mixed usage test consisted of us using the device as our regular work machine. The final test was carried out using the PeaceKeeper benchmark test. This simulated heavy duty Wi-Fi browsing - and provided a worst case scenario. 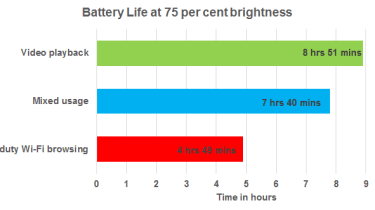 The MacBook surpassed the eight hour mark with ease in the video playback test, and came close with our real-world test. The heavy duty Wi-Fi result generated from the PeaceKeeper mark isn't too much of a surprise as all devices have struggled with this and close to five hours with heavy duty usage is nothing to be ashamed off

We wouldn't be surprised to see the MacBook surpass the 10 hour mark with moderate usage and with brightness reduced steadily throughout the day.