A well-designed convertible device with an eye watering ‘QHD’ display. 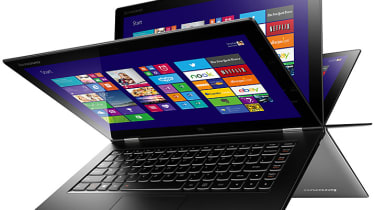 Lenovo's Yoga 2 Pro was one of the earliest and most successful Windows hybrids. Featuring a touchscreen, keyboard and full 360-degree hinge, it blended the line between laptop and tablet.

Sadly, both the Yoga 2 Pro and its successor the Yoga 3 Pro have now been discontinued and are no longer sold by the company. You can pick them up second-hand, though, and they're still pretty great laptops.

The Yoga 2 Pro is a hinged hybrid, rather than a detachable model. This means that, unlike the Surface Book or the iPad Pro, the keyboard isn't removed in order to turn it into a tablet. Instead, the full-size keyboard and trackpad can be flipped around 360 degrees to sit behind the 13.3in screen. 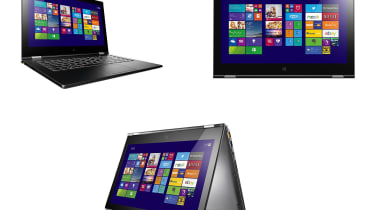 This allows it to easily switch between various modes' laptop, tablet and tent. In laptop mode, the keyboard and trackpad are simple and comfortable to use for extended sessions, whilst the Quad HD resolution means that the Yoga is excellent for watching HD movies and videos on in tablet form.

The main downside of using it as a tablet is that it's not as comfortable as other rivals. At 15.5mm thick, and weighing 1.4Kg, it's bigger and heavier than the equivalent iPad or Android tablet, which means that using it one-handed for any length of time is nigh on impossible.

Instead, you'll need to rest it on something, but thanks to the full hinge, you can prop it up in tent mode, which is a perfect way to interact with the Yoga 2 Pro's touchscreen functionality. It's also a great way to give small presentations, or to display content.

It's an ingenious and practical design and gives the Yoga 2 an advantage over its convertible rivals, which tend to have poor quality keyboards not suited for prolonged work with apps such as Microsoft Word or Excel. It's well built too, and more than sturdy enough to cope with life on the road.

There is one worry when the device is tablet mode because the keyboard is exposed. The keys are deactivated in this mode, preventing you from changing any settings accidentally, but having the keys exposed does risk of damage.

Apple has been leading the display race with its Retina technology, but as Lenovo has upped its game. The Chinese manufacturer is using a high-end IPS panel with a Quad HD' resolution of 3200 x 1800. This is four times the resolution of the original Yoga 13 and it's also 1.6 million more pixels than Apple packs in on its 13in MacBook Pro with Retina Display. 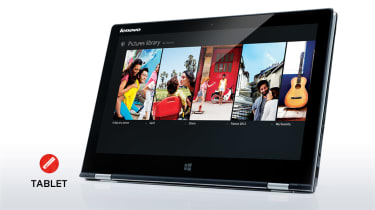 Image quality is outstanding, producing a bright, sharp and colourful image with good all-round viewing angles in tablet and laptop modes. The Yoga 2 has a maximum brightness of 317cd/m2 and a contrast ratio of 634:1 makes it good for document or photo-editing work, as well as routine tasks such as web browsing.

However, there is a potential problem with such a high-resolution display as interface elements, such as icons or dialog boxes on some applications appear tiny. We had no problem with old copies of Microsoft Office, going right back to Office 97 the main toolbar in programs such as Word was small but still usable.

Adobe's Photoshop Elements 12 did suffer, with toolbars and icons not scaling to such a high-resolution. Apple dealt with this problem with the Retina Display on its latest MacBook Pro models by building scaling options into the Mac OS that help to enhance visibility of text and graphics. This isn't the case with Windows, so the only solution for apps like Photoshop Elements is for the developer to update the app itself, or for users to temporarily switch to a lower resolution.

The Yoga 2 Pro includes a micro-HDMI port so it can be connected to a larger screen. However, there's no space on the slimline design for an Ethernet port. Other connections include 1 x USB 2.0 port, 1 x USB 3.0 and memory card slot. The base panel is held in place with a dozen tiny screws, but it can be removed in order to gain access to the memory slots and battery compartment.

In addition to the high-res display, the Yoga 2 Pro ships with Intel's latest Haswell processor - a Core i5 model clocked at 1.6GHz and 4GB of RAM.

The specification is more than adequate for running Microsoft Office apps, as well as light of photo- or video-editing for presentations work. Touch-screen controls of Windows 8.1 responded smoothly and quickly when using the Yoga 2 Pro as a tablet.

The entire screen image rotates quickly and automatically whenever you switch between landscape and portrait orientations, or when you fold the screen back into tent mode. The use of solid-state storage also allows the Yoga 2 Pro to start up rapidly, taking 9 seconds using the Windows 8 fast start' option, and 15 seconds from a cold boot.

However, performance doesn't quite match the 13in MacBook we tested out: 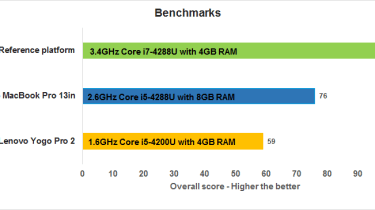 The Haswell processor does provide good battery life given the power requirements of the high-resolution IPS display. The intensive PeaceKeeper test for Wi-Fi browsing ran the battery flat in exactly four hours, with the brightness set to 75 per cent. Streaming video off the BBC iPlayer gave us five hours.

Turning Wi-Fi off and playing a continuously-looped HD video of Iron Man allowed the battery to last for a full seven hours and 10 minutes. However, this is someway short of the maximum time you can expect with the 13in MacBook Pro. 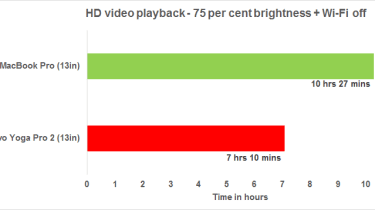 All those tests are demanding, so more casual web browsing and use of Microsoft Office apps should allow you to get close to Lenovo's claim of up to nine hours', especially with the brightness turned down further.

In terms of upgradeability, the Yoga Pro 2 is average, The base of the unit is screwed on, but can be removed with a little torque screwdriver. The battery and SSD are user accessible, but the memory is soldered onto the motherboard, so not upgradeable after purchase.

The Yoga 2 Pro packs a high-resolution display which is simply overkill for those running basic productivity software and is suitable for those using video and photo editing tools.

The weight of the Yoga 2 Pro and the size of its screen also mean that its tablet mode is only partially successful. Nonetheless, it remains one of the more elegant convertible devices of this type, and its high-quality screen and flexible design could prove genuinely useful for business users who travel frequently and need to give presentations while they're on the road.

The Yoga Pro 2 is an outstanding design effort from Lenovo - and has a great price point. However, the display can be is hamstrung by software limitations.